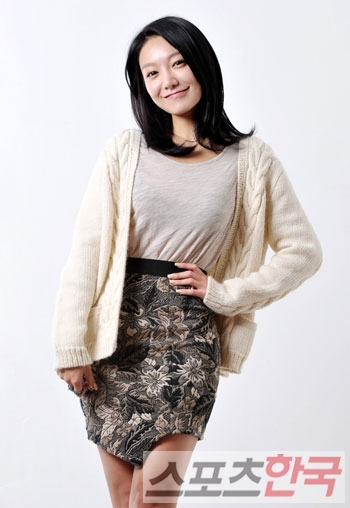 "I caused the accident due to my clumsy driving, it must've hurt..."

She has gentle eyes and a never fading smile on her lips. She answers all questions with a bold voice one by one. She is Shin So-yul from the movie "Penny Pinchers" and the SBS drama "Deep-rooted Tree". She seemed more feminine with her hair down and forehead showing.

She plays the character who is in a scooter club with unemployed Cheon Ji-woong (Song Joong-ki) in the movie "Penny Pinchers". She also kissed him in the movie.

"Actually, the scooter scene was the most difficult in the movie. I was scared and I couldn't reduce the speed so I went crashing into Song Joong-ki's scooter. It must've hurt but he said it was alright. I was so thankful and sorry".

Luckily, they are in the drama "Deep-rooted Tree" together but they don't see each other much. She acts along grown-up Sejong (Han Suk-kyu) and not Song Joong-ki, who is the young Sejong.

Shin So-yul, who appeared in the drama and movie "Jungle Fish 2", which showed the pregnancy of a high school girl, was also in the drama "Midas" with Jang Hyuk. She met with him again in "Deep-rooted Tree", coincidentally. She appears as a palace maid in the drama.

She has a remarkable career record. She was a soccer player in middle school for three years and she quit high school. She sat through qualifications exams and is currently attending Kookmin University in the Department of Theater and Film.

"I started sports when I was in elementary school because of my tall height but it was when women's soccer wasn't widely known. The reason I quit high school was because I wanted to act. I pursued my dream of acting in the neighborhood theatrical group. I don't have memories of uniforms but I think I can do better now".

She was also the MC for MNET's "M! Countdown" with her idol Tony Ahn, and she is currently the MC for a Military Broadcasting system program.

"I am known as a very bright and cheerful character but I want to be feminine. I want to do melodramatic flicks as well. I am also looking towards thrillers and action".

"[Interview] "Penny Pinchers" Shin So-yul on a scooter"
by HanCinema is licensed under a Creative Commons Attribution-Share Alike 3.0 Unported License.
Based on a work from this source