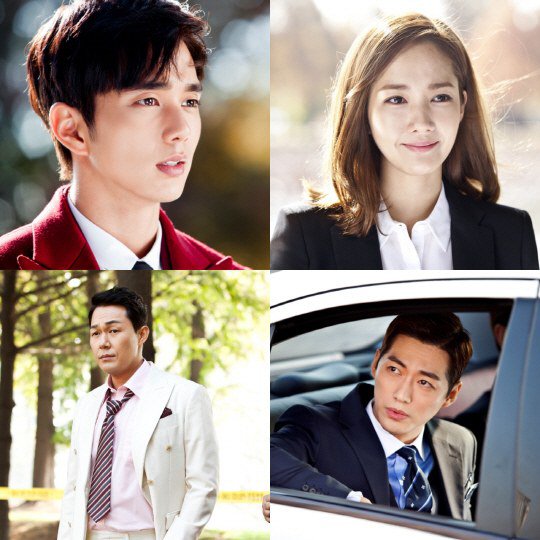 Writer Yoon Hyeon-ho answered 10 questions prior to the broadcast.

"Remember" stars Yoo Seung-ho, Park Min-young, Park Sung-woong, Jun Kwang-ryul and Namgoong Min which is already a very promising cast. This drama is expected to be one of the greatest dramas of 2015.

Writer Yoon Hyeon-ho spoke about the drama in an interview.

Q: Song Kang-ho starred in the movie "The Attorney", Hyun Bin in "Confidential Assignment" and this time it's Yoo Seung-ho. What impressions have you had about them?

Writer Yoon Hyeon-ho: I had Yoo Seung-ho in mind when I started writing the drama. He's got a wide spectrum which allows him to be a high school student to a young lawyer. I loved his performance in "Missing You".

Park Min-young looks natural and has a feel of her own. Her unique loveliness makes her worthy of the leading role and penetrating her shows naturalness and persuasion. As a writer I'm grateful.

I think Park Sung-woong is both charismatic and kind. So I believe he has what it takes to be the lawyer character he plays in "Remember".

The story just got fuller with Namgoong Min. There must be a bad guy. Tension is added to the story and that's when the objective becomes clear. Namgoong Min is a precious source that allows our story to run powerfully.

Which is the character you take to the most or which actor are you expecting to show change?

That's going to have to be Yoo Seung-ho. From the childish high school teen, the desperation to save his father and the sorrow; I want to bring out every color inside him.

Is there an actor you think is just right for his or her role?

Speaking outside of the main cast, I think Han Bo-bae in the role of Oh Jeong-ah is perfect for what she is. She corresponded with the image I had when I wrote the screenplay.

Is there something you would like to say to the cast as the writer?

I just want to thank them.

"Remember" is a humanly court drama. What is the difference between it and other dramas or its strong points?

I want to say it's a story of warm people gathered around a cold court. It deals with legal matters but not so often.

You have succeeded in gathering 11.3 million audiences with the 2013 movie "The Attorney". Do you expect that flow of success to lead to the drama?

I wasn't anticipating that during "The Attorney" and the same goes for "Remember". I am focused on making the schedule on time so that everything goes around well. I can't afford to think about percentage as well. I am just prepared for the worst.

"Remember" is about freeing the name of an innocent victim just like "The Attorney". Is there something you did to build a background on this or is there a true story behind it?

I read and watched several court dramas and movies while writing "The Attorney" and I also went to the court for sources. I was even asked to become a court specialist. I also thought about 'people' and 'cases' while I did that. Everything in the drama is based on real motive and the subject of 'memory' is something every writer would want to deal with.

What is something you don't want the viewers to miss while they watch "Remember"?

The actors and actresses are really good. There's not one who didn't perform from the heart.

It is said that besides the romance between Yoo Seung-ho and Park Min-young there's going to be friendship between colleagues, family love between father and son and loyalty. Is there a specific couple you feel for the most?

It's Yoo Seung-ho and Park Sung-woong. They are alike but different in many ways. There is bromance in which one can't be without the other.

Every single member of the staff are working hard to make "Remember" be remembered. How do you want it to be remembered? Is there a message you would like to deliver?

The thing that lasts the most in life is "Remembrance". Sad, happy or beautiful, the person with the most "Memories" is a rich one.

Meanwhile, "Remember" is about a genius lawyer struggling to free his father of a crime he didn't commit.

"Remember" starts on the 9th of December.

"[Interview] "Remember" writer Yoon Hyeon-ho, "I wrote this thinking of Yoo Seung-ho""
by HanCinema is licensed under a Creative Commons Attribution-Share Alike 3.0 Unported License.
Based on a work from this source