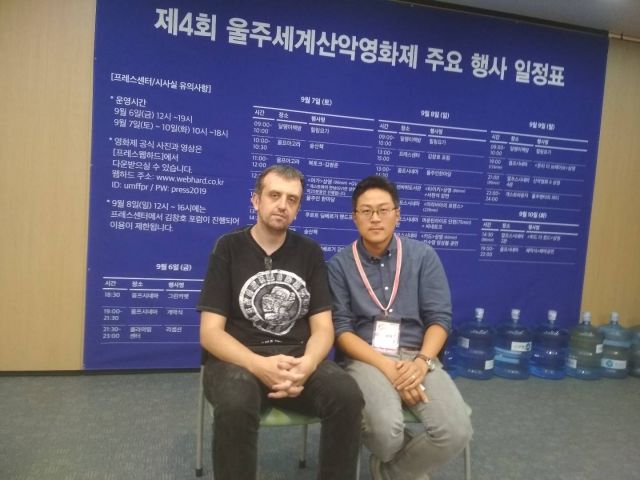 Seo Won-tae-I is a filmmaker and visual artist.  His first feature film, "Synching Blue" (2007) was introduced in Vancouver IFF and Jeonju IFF, while a number of his films have screened at del Plata IFF, Busan IFF and more. Currently, he is also a professor of VIS at Kongju National University.

On the occasion of "A Letter from Phnom Penh" (festival entry)  screening at Ulju Mountain Film Festival, we speak with him about his work as a professor, his unusual approach to film and the reasons behind his choices in the particular film, Korean movie industry and other topics.

Can you tell me a bit about your work as a professor?

I am teaching filmmaking techniques in Kongju National University, meaning editing, sound mixing etc. The reason I work there is because I can get a steady salary, which helps me shoot my own movie.

Sometimes it is fun, but labor is labor, working is working.

Why did you choose to have two different strands, narratives in the film?

Because I wanted to erase the borders between the fiction and the non-fiction part. I am interested in the how you can construct the story by using cinematic techniques like montage and sound design; that is why I chose two narratives. I think there are more than one perspectives, it depends on the viewer.

Why did you choose the particular topics, farming, and the letter to the father?

My producer, Lee Hye-won is a curator, she has curated many exhibitions about environmental or food issues and I participated as an artist in this kind of exhibitions before and we wanted to show these issues on film, and that is why we started the first steps of what is to become a feature. "A Letter from Phnom Penh" will be eventually developed into a feature. I just finished shooting an episode in Tokyo, there will also be one in Korea, while the first one was shot in Kazakhstan. 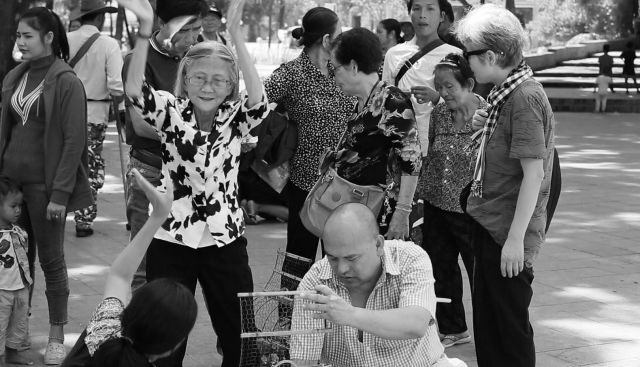 Why is the film in black-and-white?

I wanted to use color effectively, when I use color in the film it is in order to make the audience feel that what they are watching is non-fiction. Because black-and-white points towards fiction, so I wanted this part to clash with color part, as again I wanted to erase the borders between fiction and non-fiction.

Because of the French colonial history in Cambodia. When I shot the footage there, the particular space gave me some sort of perspective. Because when I started shooting in Cambodia, I had not decided on anything, just to turn the camera towards the particular space, Cambodia, Pnom Penh and Battambang, and the character. She is not a real character, she is fictional, and that fact gave me the idea of using French. There is also another reason. I contacted another woman, Cecile, a Korean who worked in theater 45 maybe 50 years ago in France, so her nationality is French. She is a friend of a friend. I asked my friend to ask her to do the narration of the film, and the interesting thing about her is that she does not know her real father. So, whenever she talks to her "father" in the film, she might think about her French father or her Korean father. That part picked my interest in particular and then she read the script and I told Cecile that she could change the whole part of the narration if she wanted. However, she did not change anything, she just recorded her voice in the apartment. I wanted to use that feeling of Cecile, when she read the script, because of the particular context of her life, and that is why I used French.

Hye-won suggested to travel to Cambodia to research about rice farming and its connection with bats, and that is why we travelled there.  There is a lot of foreign investment in Cambodian agricultural industry. Before the investment, the farming in the country used to be environmentally friendly. Traditionally, it has been that way because Cambodia is home to a large population of bats and they fly at night, catching and eating bugs so they do not have to use pesticide. The investment from foreign countries kind of disturbed that balance, and I wanted to show that, that is why I travelled to Cambodia.

How much time did you spend in Cambodia shooting, and how much time editing the footage you recorded?

For shooting, 5-6 days. About editing, actually, every night after shooting, when I returned to my hotel room, I edited the footage with my laptop, in an effort to create a kind of a love card, without changing the order of the footage. When I returned to Korea, I rearranged the order a bit but basically I used the work I did in Cambodia. I think this is a very effective method in editing footage.

How many people in your crew?

Lee Hye-won produced and I as the director, cameraman and recording sound, and a Cambodian coordinator who works for the Cambodian National University as a lecturer. 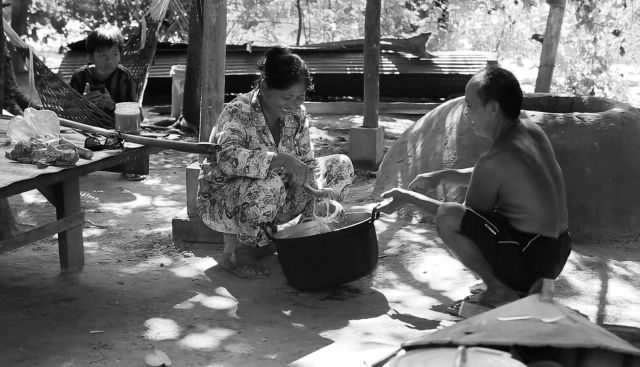 How about the people who appear in the film? Where did you find them?

Has the film screened in Korea?

Ulju Mountain Film Festival in the second screening, a month ago I showed it in Seoul, at Seoul International New Media Festival.

How did the audience respond to the film, since it is quite an unusual production?

It is a difficult film, particularly regarding the understanding of the storyline. They understand the main theme, because it is a very important topic, but that's it. As a director, I am more interested in the cinematic approach, how do I structure the image and the sound tracks to express theme and to create different types of film. The audience, however, want a story; story is more important to them, but this is not my interest.

Because 15 years ago, I studied so called experimental film in San Francisco Film Institute, because I am interested in the film as a structure and not in the result of the film. Some filmmakers want to get money and I am not interested in this kind of cliché movies that are screened in the multiplexes, in terms of how they structure image and sound. But people love stories and watching actors and actresses...

Was it difficult funding the film?

I received a fund from Ulju Mountain Film Festival and the rest of the funds come from the money I make from teaching in college. I am happy with this arrangement. If someone helps me finish my films, that is great, like in the case of "A Letter from Phnom Penh" and Ulju Mountain Film Festival. Also, Lee Hyu-won makes some money from her exhibitions, which are great, I think she is a pioneer of the art scene.

And what about your next projects? You mentioned you will make this film into a feature.

Yes, that is the plan and also this spring I had my own exhibition as a filmmaker, not in a screening room but in a gallery. I also have another project that is a work in progress. 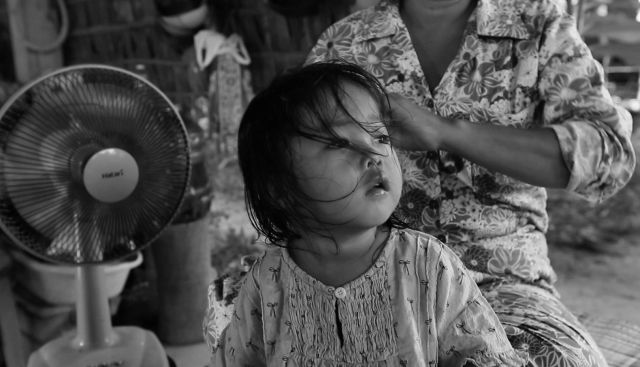 What is your opinion about the Korean movie industry at the moment?

At the moment? That is an interesting question. I think large sums of money are coming into the Korean movie industry, from production companies like in the case of Netflix. I would say for the past three years, there has been an injection of large sums in the industry from foreign companies, who seem to pay more than the local ones. That is a good thing, because filmmakers have better chances of finishing their projects. However, this is not the case regarding Korean funding; this is American funding. I think, at some point, there will be some kind of balance between these two types of funding. I also think that this Netflix money also help train Korean filmmakers and technicians and that will be very helpful for the future of the industry.

In terms of diversity however, most of the production is on feature films, mainstream films, so I feel there is a big gap between art films and commercial films. When I had interviews with the big Korean festivals, like Busan, Bifan and Jeonju, they asked me how will I distribute my film after finishing my project. I am skeptical about this question, why do I have to worry about that part. They think that is a very important aspect of filmmaking and so they want you to choose more general issues, a more common approach, like in genre filmmaking, and I do not like that part. If I suggest an experimental approach to finish my project, they do not understand that, they ask me how I will finish this project, where I would find the money and after finishing, how can I distribute and show my film. I feel this is a big problem these days. When I was younger, 15-20 years ago and I had an interview with a committee from a festival to get funding, they would not ask that. They would ask to see my portfolio and try to understand what I want to do, and they would give money, not much, but enough to finish a film like mine, because they trusted the cinematic approach. But now, they feel that approach is dangerous because you cannot trust diversity.

"A Letter from Phnom Penh" is directed by Seo Won-tae-I, and features Lee Hye-won. Release date in Korea: No release date yet.