[Interview] Song Kang-ho, "The answer is to not do it if it's not the best" 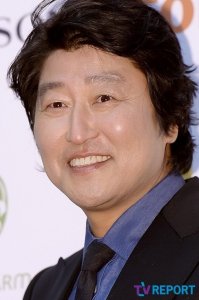 A paler Song Kang-ho said, "It took 23 hours and 50 minutes to come to Martinez Hotel from Pusan where I was filming "Thirst"". It is his second year coming to Cannes, last year with "Secret Sunshine"and this year with "The Good, the Bad, the Weird". He hopes that "The Good, the Bad, the Weird" can be a movie to revive the Korean movie industry from its slump. It has a screening on the 24th out of competition.

On the 23rd, Song Kang-ho consented to an interview for forty minutes on a hotel terrace, and continued to share fun stories while having dinner. He was tired, but he willingly answered questions about "The Good, the Bad, the Weird" and "Thirst" for the Korean reporters that visited Cannes. His hearty laughter spread across the café.

-This is your second year in a row at Cannes. Your current thoughts and feelings?
"Secret Sunshine" and "The Good, the Bad, the Weird" both have weird themes, and I'm glad that I was able to attend the most famous film festival.

-You seem worried.
The Korean movie industry has been in danger for about two years. The number of movies that came out this year is at 80. It is only a matter of time before it becomes 70 and 60. "The Good, the Bad, the Weird" is a 20 billion won project, but compared to Hollywood blockbusters, it's a small amount. Our nation's movies have the greatest competition compared to their budget. I hope this movie can be the work to revive the pride of Korean movies.

-It's your second time working with Director Kim Jee-woon after "The Foul King". He says that 'the weird' just had to be Song Kang-ho.
It turned out that way. I must have seemed weirder to the director than Jung Woo-sung or Lee Byung-hun. I play the role of Tae-gu, who escapes to Japanese Manchuria and lives off loot from robbing trains. He has the persistence of a weed. He has no form but he's strong-willed.

-In some ways, all three are good and bad, and have a weird aspect to them.
That's true. A good person turns into a bad person, and a weird person turns into a good person. It was hard to find the balance, and that will be the key to view the movie in a fun way.  -There were a lot of dangerous scenes.
I was shooting the scene where I had to jump from a motorcycle into a jeep, and I was nervous because pebbles were hitting my body. We couldn't use a double, and even with safety pads on my chest and stomach, it hurt. Director Kim got more white hairs while filming this. A Western usually has a loose side, but this Korean Western is filled with fighting action. We three actors had to pray for easier scenes.  -How was acting with your juniors?
I've never thought of them as my juniors. They are just colleagues who are younger than I am. Don't they have more experience and become famous sooner than me? You can't say that I taught them anything. We got closer when we played soccer with bets on food. It's not easy to work together like this, and I think the director's ability is that big.

-"Thirst" is your next work. It seems you're doing the extremes.
"The Good, the Bad, the Weird" and "The Host"are movies you can see with your family, but "Thirst" is one that children cannot see. It was more fun while shooting "The Good, the Bad, the Weird" because I knew it was something my children could see.  -What kind of person is Kim Ok-vin, who is your opposing role in "Thirst"?
I can say this confidently, but if last year was Jeon Do-yeon's year, next year will be Kim Ok-vin's. She's fascinating and has great sensitivity. I know she's been hurt through the internet, but I advised her that it was growing pains.

-There's word that "The Good, the Bad, the Weird" has anti-Japanese sentiment and nationalism.
If you see the movie tomorrow, you'll see how wrong that question is. It's purely an entertaining movie that you can enjoy for two hours.   -No disappointment that you're not in competition? Not at all. There is a commercial side to this, so it was not intended for competition. The screening is on the last day, and the Cannes chairperson volunteered to host it. It's no different than receiving a big award. "Indiana Jones 4" is also out of competition.  -The reason for refusing constant proposals from Hollywood or foreign films.
They are not using me at my best potential. Think about it. Would Sean Penn or Robert de Niro have played the car center owner in "Secret Sunshine"? The answer is to not do it if you can't show them your best.
-Lastly, weren't you disappointed with the low success of "The Show Must Go on"?
It was disappointing. You can't ignore the effect of the seasons. While touring Seoul and Pusan, the cherry blossom festival and the K-league were disheartening factors. My heart was torn when I thought about who would come to a dark theater during the blooming, green season.

Song Kang-ho will leave Cannes the earliest on the 25th, because of Director Park Chan-wook's "Thirst", which is aiming for next year's Berlin Film Festival.

"[Interview] Song Kang-ho, "The answer is to not do it if it's not the best""
by HanCinema is licensed under a Creative Commons Attribution-Share Alike 3.0 Unported License.
Based on a work from this source