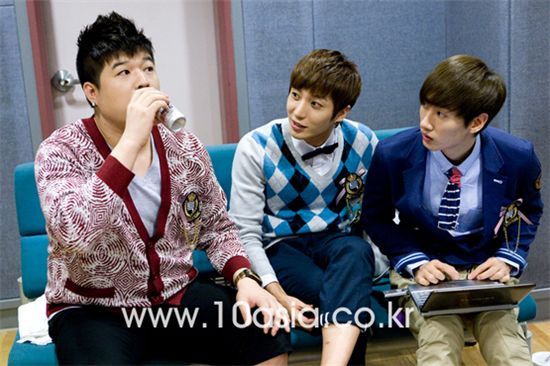 SBS talk show "Steel Heart" aired for the first time on October 6 of last year. And during the early stages of this massive show, while over 20 guests 'battled' each other with stories which are funny, sad or absurd, regular panelist Boom created small segments titled 'Boomkikago' and 'Boom Academy' which filled up the spaces in between such talk. His joining the military less than a month after the show premiered created a vacuum but his brilliant students Leeteuk, Shindong (Shindong) and Eun-hyuk of boy band Super Junior continued his legacy with 'Teukgigayo' and 'Teuk Academy'. So how did these boys -- prince charming to numerous girls and hosts of their own radio shows -- carry on 'Teuk Academy' for a year? 10Asia met with the three who were busy preparing for a recording of "Steel Heart".

10: When "Steel Heart" first premiered, the three of you hosted 'Boomkigayo' and 'Boom Academy' with TV personality Boom. However, Boom entered the military a month later. How did you feel after hearing the news for the first time?
Leeteuk: I was really at a loss. Honestly, before becoming really close to Boom, I always thought we would just go and shoot entertainment programs. But he taught us, "Whenever you make an appearance on a program, think about why you are on it and go on it prepared". He then added, "Let's try doing something together here". Also, "Steel Heart" was such a popular show from the start that we were worried whether we'd be able to keep doing well without him.

10: But it's already been a year now so I'm sure you're feeling all sorts of emotions.
Eunhyuk: We too say amongst ourselves "It's been a year?" a lot. We have made many memories on "Steel Heart" while preparing for 'Teukigayo' and 'Teuk Academy'. 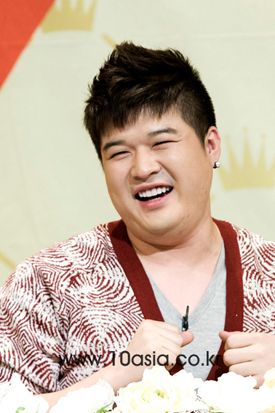 10: In order to prepare for each segment, you would have to know who is appearing on the show, who that person is and if it is singer, you would have to practice their dance moves and be well informed before the show since there are an average of 20 guests. How do you prepare?
Leeteuk: The three of us get together at around 3:30 a.m. since the radio show "Kiss the Radio" that Eunhyuk and I host ends after midnight and Shindong (Shindong)'s MBC radio program "Shim Shim Tapa" finishes after two a.m. That is when we receive the list of guests from the producers and we begin to dig up any humiliating or past photographs and send them [the producers] an e-mail.
Eunhyuk: Many of the producers help us now but in the beginning we did everything ourselves. It was all handmade. (laugh)
Leeteuk: Also, if there are any singers or celebrities who had a career in music, we get a list of their tracks together and try to create any dance moves or skits that could go with the lyrics. Even when we have two skits, it feels like it's not enough so we begin searching online for humorous situations or add in any funny stories that we know. By then it is about 6:30 a.m. and towards the end Shindong (Shindong) edits the songs. When that is all finished it's between 7 or 8 a.m. and we sleep until 11 a.m. and shoot the show for about ten to 12 hours.

10: I think the most popular segment has to be the 'introduction of past pictures' although it seems like you guys are trying out many new things as well. Are there any projects on the back burner that you think could be popular? (laugh)
Shindong (Shindong): I thought the segment where you play with people's names would be a hit. It was originally done by comedian group Tin Tin Five. We talked with comedian Hong Lok-gi a while back and he said it was okay for us to write them since we liked it. So we came together, came up with a skit and we laughed over it so much during the meeting for it. However, when the segment aired, many of the names we called out got edited out. (laugh)
(laugh)
Leeteuk: It was funny for a week, only a week. (laugh)
Eunhyuk: There is also the corner 'Pop Song Gag' that comedian Park Sung-ho had done and we tried really hard to come up with a skit for that as well but we were out of ideas in two weeks. (laugh)
Leeteuk: Park Sung-ho told us that we were doing a good job and gave us his sources and gave us several song ideas. But it is definitely hard for us to come up with segments because we lack the ability to since we aren't comedians.

10: You guys are famous for your fun and diverse performances during your concerts. It seems that appearing on different entertainment programs have trained and helped you a lot.
Leeteuk: I think we learned the overall flow of being on a variety show because on "Steel Heart", we have Korea's top emcee Kang Ho-dong and 'Midas Touch' [everything becomes a hit] Lee Seung-gi. Everyone has a role but if variety shows have emcees, there are also guests and I think the three of us form a connection between them. We are learning a lot about how to present and hold back depending on the guest. At the same time, we think about the kinds of role that we will be playing as we get older and that is what helps us figure out our position.

"[INTERVIEW] Super Junior's Shindong, Leeteuk, Eunhyuk - Part 1"
by HanCinema is licensed under a Creative Commons Attribution-Share Alike 3.0 Unported License.
Based on a work from this source