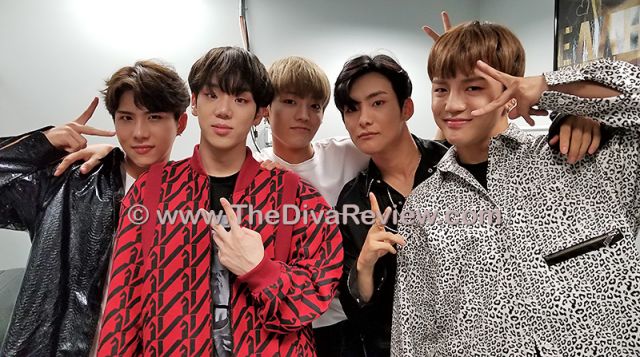 From the world of South Korean televised talent competitions, five young men combined their gifts of dance, rap, and song to become A.C.E {Adventure Calling Emotions}. In the year since their debut, Jun, Donghun, Wow, Byeongkwan and Chan have impressed fans at home and overseas with mesmerising vocals and whiplash-sharp choreography.

Making their appearance at the first K-Expo in New York City, A.C.E. spoke with LMD exclusively about the surprises of the past year, and their hopes for the future.

The Lady Miz Diva: You only debuted a year ago; tell us about the past year?

Byeongkwan: We have been trying a lot of new things; we have our new album, and we went to the survival programs. We have also had our fan meetings, and tours, and concerts. We had been doing a lot of things in the past year.

LMD: I understand you got your start busking in Hongdae? What did that experience teach you about performance and the expectations of the audience?

LMD: Each of you was on talent competition shows. What did that experience teach you?

LMD: I feel like you have a lot of love from your international "Choice" fans? What do you think is the special connection that you have with them?

B: I think our first connection is through SNS; Twitter or YouTube. They can see us from SNS, so they got curious about us and they searched for us, and that's how they became a fan of A.C.E.
We also have different languages: We can speaking with very well, and there's one member who can speak Chinese very well, and we can speak Japanese, as well. So we practice a lot of language for the fans.

LMD: My sense is it is always important for groups to really be part of their product, to participate in the concepts, musical direction and so forth. I understand you take part in the songwriting. Is that in order to put your stamp on A.C.E. and really make reflect who you are as artists?

B: Usually, idol groups have separate parts, either rapping or singing, already. But in A.C.E., everyone is talented and all the different parts {Laughs} , so we don't worry

LMD: We have a lot of features on actors and I know that Jun has appeared in some dramas is acting a goal for each of you?

C: There are no plans, but we are very willing to act.

Donghun: Our only passion right now is music.

LMD: Turn to the person to your right and tell me something you admire or that surprises you about that person?

Wow: I have a lot of things to say about Byeongkwan, so I have to think a lot. My name is Wow, but whenever I see Byeongkwan dancing, I have to say, "Wow!"

B: His name is Jun. when I see him, I say, "Juuuuunnnnn". He is very responsible. He is a real leader,, that is why he supports everyone. He is like the column of the A.C.E..

Jun: Donghun-hyung, first of all, he's perfect. He is the eldest, and he takes care of all the members, and we can see that. But sometimes he is like the youngest, so we all want to take care of him.

D: Chan is always full of energy. That is a very positive thing for me. He is also making the atmosphere happy and hyper.

LMD: Your covers of other artists helped make you popular, but who are your influences as performers?

B: In the past, I used to get inspired by Justin Bieber. I studied and analysed his nose {nasal} sound.

J: I've loved Boyz II Men since I was young.

LMD: What is the ultimate goal of A.C.E.?

B: So, like BTS, we want to participate in the AMA's. But the most important thing is that we want to be good to our fan members.

"[Interview] The Lady Miz Diva Meets A.C.E."
by HanCinema is licensed under a Creative Commons Attribution-Share Alike 3.0 Unported License.
Based on a work from this source