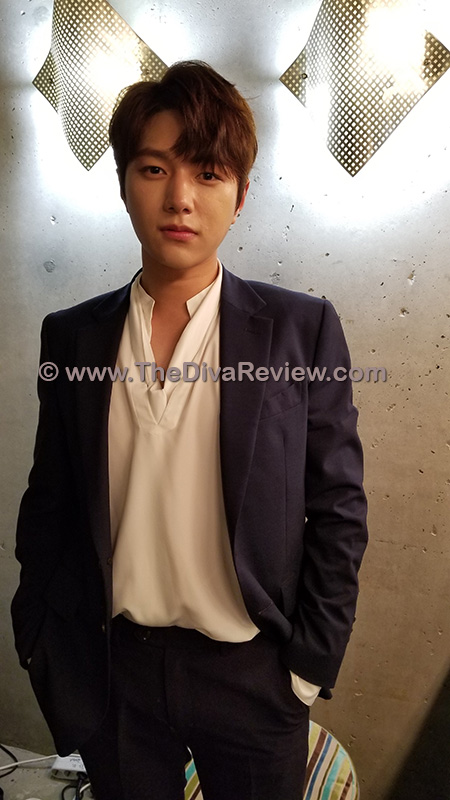 As the visual of South Korea's supergroup, INFINITE, Kim Myung-soo, a.k.a. Kim Myung-soo, has parlayed his profile and massive fame at home and overseas into an acting career in standout dramas, like "Master's Sun", "Ruler: Master of the Mask", and "Miss Hammurabi".

During his solo appearance at the first K-EXPO in New York City, Kim sat down for an exclusive chat with Kim Myung-sooMD to talk about his aspirations as an actor, singer, and now as a composer; as well as his arrangements for a long-awaited INFINITE reunion for the fans.

KMs/Kim Myung-soo: There's nothing special about it, because I've been here a few times, but this time, I got to learn more about New York, which is really exciting. Especially, I'm excited to meet all the fans that are here.

Kim Myung-sooMD: Of course, we know you as a member of INFINITE. Tell us what appearing with the group around the world has taught you as an actor?

Kim Myung-sooMD: You have acted with many well-known seniors. Can you tell us what was the best advice anyone has given you with regard to acting?

KMs/Kim Myung-soo: The key is being natural: Acting natural, so I'm not all tensed up. That is something I learned the most from all the seniors.

Kim Myung-sooMD: Whose advice did you follow the most?

KMs/Kim Myung-soo:  Sung Dong-il sunbaenim {"Miss Hammurabi"}. We acted together, and we spent a lot time together.

Kim Myung-sooMD: You've been nominated for some of your drama roles, and last year won with "Ruler: Master of the Mask". Does being praised in this way affect your perspective on acting?

Kim Myung-sooMD:  Tell me a role you see yourself playing? Anyone from a previous film, or a book, or even someone in your imagination that you would like to try?

KMs/Kim Myung-soo:  In the past, I was looking for specific roles that would suit me the most, like this and that. But now, I want something that suits my age the most; something that would be the best on me, and what the fans would like to see the most.

Kim Myung-sooMD: The INFINITE album, TOP SPEED was notable for many reasons, including your composition, "Reminisce". You have begun to show yourself as a songwriter. What does that do for you creatively?

Kim Myung-sooMD: Do you receive encouragement from your band members?

KMs/Kim Myung-soo: The members didn't know before, actually. When they heard it, they went, "Huh, you're pretty good".

Kim Myung-sooMD:  We know you as a singer, dancer, actor, composer, and published photographer: Is there any other artistic pursuit you haven't tried that you would like to?

KMs/Kim Myung-soo:  Obviously, I really want to try a lot of different things, but I already have acting, singing, and songwriting, and photography, etc. So, I really want to focus, and be really good at what I'm already doing.

Kim Myung-sooMD:  Being part of the acting world, a natural question is have you considered writing or directing a screenplay?

KMs/Kim Myung-soo:  I want to focus, instead of films, more on the drama aspect of it.

KMs/Kim Myung-soo: I'm interested in both films and dramas. But I just have this feeling that my next one is going to be a drama.

Kim Myung-sooMD:  INFINITE is eight years old. You've faced a big turning point this year, and came through it. How can INFINITE's Kim Myung-soo keep on growing and progressing?

Kim Myung-sooMD:  Of course, INFINITE fans need to know what is coming up in the future. Can you give us some things to look forward to?

KMs/Kim Myung-soo:  INFINITE is going to be holding a fan meeting. I'm still searching for countries that I am confirming at the moment. It has been a while since all five have been together, so we're in preparation to show a lot as the five members.
If I have a chance, I'd love to come back to New York and do it.

KMs/Kim Myung-soo:  I want to focus on acting and singing, and be known as someone who is well-rounded and can act and sing.

KMs/Kim Myung-soo: As a singer, I am preparing my solo album. As an artist, I'm considering potential work that I can do next. I would appreciate if the fans would wait patiently, so I can come up with great work.

Kim Myung-sooMD: Would you please give a message to your fans?

KMs/Kim Myung-soo: It's been a while since I've been to New York. I am so happy to be back. Even the next time I'm in New York, I wish to see you again with more content and more exciting stuff going on. The New York fan meeting was very happy for me.

"[Interview] The Lady Miz Diva Meets INFINITE's Kim Myung-soo, Kim Myung-soo"
by HanCinema is licensed under a Creative Commons Attribution-Share Alike 3.0 Unported License.
Based on a work from this source