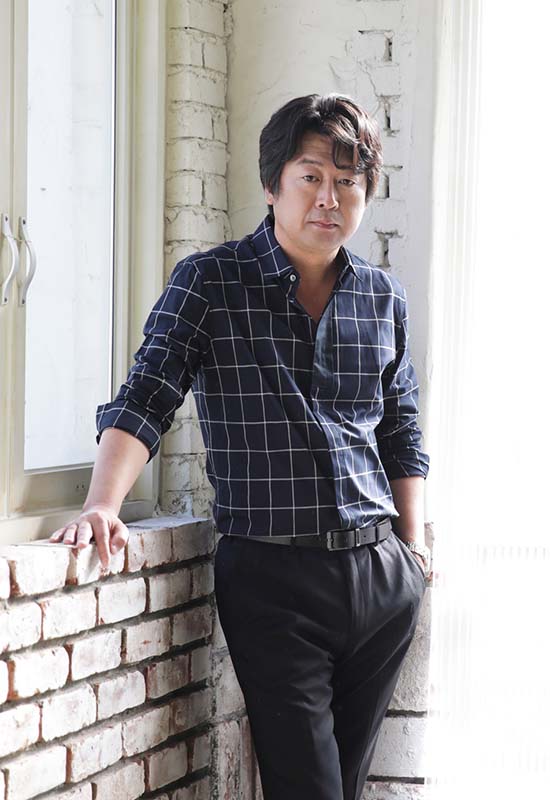 Actor Kim Yun-seok is one of the most recognisable figures in South Korean cinema.  His deep, resonating voice and imposing screen presence has mesmerised audiences in films like "The Yellow Sea", "Tazza: The High Rollers", "The Thieves", "Hwayi : A Monster Boy", "Haemoo", and "The Fortress".

At the New York Asian Film Festival to receive this year's Star Asia award, Kim spoke with LMD about the passion and real-life experiences that compelled him to star in Director Jang Joon-hwan's historical epic, "1987: When the Day Comes".

The Lady Miz Diva: How do you feel receiving Star Asia award before the New York audience?

Kim Yun-seok: Definitely, I would say I'm so grateful to be receiving this award. I will confess that the word star, I am not very accustomed to that word, but I do believe it was because of the great success of "1987: When the Day Comes", so, I am very grateful.

LMD: "1987: When the Day Comes" is screening here. Please talk about your involvement in the film. How did you become attached to it?

Kim Yun-seok: Director Jang Joon-hwan, he's one of my favorite directors. We happen to be very close, and I've always been curious about what he will be working on next. So, we've been very naturally having many conversations about the film. So, I think in the casting process, as well as when he was writing the screenplay, we were just naturally talking a lot about the film.

LMD: So, the film has been in planning for quite a long time?

LMD: As someone who did not know about those events, I'm curious what it was like for people who actually went through those times. Without getting too personal, would you say the representation of that period in the film fit your recollections?

Kim Yun-seok: In the year of 1987, I was actually a college student. At the time, I was actually involved in my college drama club, and because there were so many demonstrations going on in the city at the time, the schools were constantly being closed down. Tear gas was a common occurrence, everywhere.

Ninety percent of this film, it was really based on historical fact, and as me, myself, I had been actually experiencing that in the year 1987. So, I also feel that this is really historically accurate.

LMD: Actors take roles for many reasons. Was the historical and political message of "1987: When the Day Comes" part of why you wanted to join?

I think the trigger of this whole movement, it wasn't just a small section of people in the country; it was everyone in society. From religious organisations, to marketplace people, students; it was actually a very titular, defining historical moment, I believe.

I feel like this should be a message, that we shouldn't forget the power that we have as citizens to overthrow anything that is unjust, anything that is oppressive, and to really achieve freedom that human beings deserve. That is really what the message is of "1987: When the Day Comes".

LMD: Another film of yours that was released in the US last year was "The Fortress", which was an examination of the futility of war through a historical backdrop. Between "1987: When the Day Comes" and "The Fortress", do you find yourself leaning toward conveying this type of message in your performances? I wonder if the more warlike way the world is turning has an effect on your choices?

Kim Yun-seok: It's interesting that you mention that. Last year in Korea, there were a lot of films that were released that pertained to themes of war and such, and I think that's very uncanny, because at the time, we were going through the impeachment of President Park, so, I think that was sort of lodged in the collective consciousness of the people, as well.

Definitely, one hundred percent, I am a person that definitely advocates for peace. But like I just said, I do very much believe that when society is going in the wrong direction, we do need to preserve a power to say no, and to rise up against oppressive governments or systems.

LMD: "Haemoo" premiered at Lincoln Center, and Director Sim Seong-bo and Director Bong Joon-ho attended. I went up to Bong after the film, raving about "that man" who was "like the Korean Robert Shaw!" All that to say there is an intensity you have as an actor, that I have rarely seen anywhere. It makes me wonder about your process. You seem like a lovely man, but you do some awful things on screen. Are you the type of actor who has to immerse himself in the character, or can you walk away from it at the end of the day?

Kim Yun-seok:  I love Robert Shaw, too. He played that German officer in BATTLE OF THE BULGE. I think he had a great character that Spielberg also liked, and he had a very interesting quality to him. But to answer your question, I don't really have much stress about leaving the character on set, because I feel like for me, my process is I'm able to do away with stress in my real life through my acting. {Laughs}

So, when I'm acting, it's actually very therapeutic for me, because I'm dealing with my stress. So, yes, I very happily go back home to my daughter. {Laughs}

LMD: Because some of your characters are so dark, do you try to find something humanising in them?

Kim Yun-seok: Of course, as you know, Director Jang has worked with me twice on these villainous characters {"Hwayi : A Monster Boy" and "1987: When the Day Comes"}. I do feel that playing villainous characters does present a challenge in a way, because you really have to explore the shadow side of your nature. I think that it's two sides of the coin; we have a light side, and we have a dark side. That is the inevitable destiny of being human. But I do feel that we are able to really see the real worth of the light when really try to explore what is in the dark, and what is in the shadows.

So, I feel that is why I'm also very attracted to these characters, because they are imaginary. They are not real. If I were to really do that in real life -- that would be horrendous. {Laughs} But I'm able to explore it in the imaginary world, which makes it very enticing.

LMD: What is the perfect direction scenario for the great Kim Yun-seok? Do you prefer to be strictly directed, or are you someone who likes to collaborate to create the character?

Kim Yun-seok: I really like to work intimately with my directors. I like to talk with them a lot about my characters. That is the style that I like.

LMD: You came from the stage and made your first appearance in a feature film in 1994, which some might feel is kind of late to begin a movie career. Why did you wait to take the leap into cinema? Was it due to simply not wanting to leave the theatre?

Kim Yun-seok: There's no particular reason why. I definitely had a great love for the stage, as I do now, as well, but that wasn't the main reason why I started delving into TV and film, later on. Mostly in Korea, people give you a proposition of wanting to cast you in film or TV, and for me that came a little late in my life, so that's how it happened.

LMD: I understand the stage has inspired you to take your first step as a director. Can you please tell us about the upcoming film we're hearing about called "Another Child"?

Kim Yun-seok: So, just to clarify, "Another Child" is not an officially produced play. It was actually a workshop production which I was able to see, and I wanted to direct that into a film. Because it hasn't been released, I can't talk too much about it, but I will tell you a little bit about what's about.

So, the central idea surrounding this film is, does age actually determine whether or not you are an adult? We have fixed notions -- you have to be over 19 or over 20 to be an adult, but is that really the defining standard of determining adulthood?

LMD: You've been in historical melodramas, crime movies, thrillers, fantasy films, supernatural movies, comedies.  Is there a genre that you haven't explored as an actor that you would like to?

Kim Yun-seok: So, I think I'll talk more in terms of genre. I would love to be in a film kind of like "Save the Green Planet" by Director Jang Joon-hwan, but in an even more eccentric and funny way. Something that takes me to the next level. I would love to be in a film like that. Director Jang Joon-hwan in "Save the Green Planet", he literally bombed the whole planet and kills everyone on it, so next time, it's gonna be an even bigger scale, so he'll kill everyone in the whole universe. {Laughs}