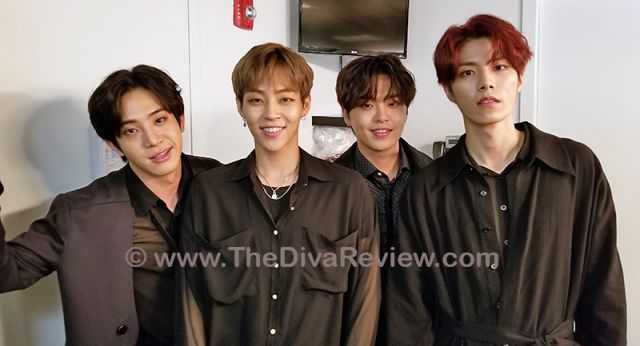 In the famously pre-fab world of Korean pop music, a group coming together of their own accord is a rare article. The members of THE ROSE gravitated toward each other like magnets, drawn together by their love of rock music and performing. In the year since their debut, THE ROSE has had remarkable success both at home in South Korea and overseas with their singles, "Sorry" and "Like We Used To".

At the inaurugal K-EXPO in New York City, the Lady Miz Diva had an exclusive chat with Sammy (Woosung), Leo (Dojoon), Dylan (Hajoon), and Jeff (Jaehyeong) about the roots and blooming of THE ROSE.

The Lady Miz Diva: It's been a little over a year since THE ROSE debuted. What has the year been like?

Sammy: It's been crazy. So many things happened. We went on a European tour, an American tour, South America, and North America, both. We had a whole bunch of shows in Korea, and we have upcoming shows -- another year of tours.

I mean, everything all around -- it's been a crazy year. We are so thankful for everything, our fans, and the things that we could do because of them. So, yeah, thank you.

LMD: Organic is not a word we associate with modern Korean music, yet THE ROSE Rose seems like a very organic group.

LMD: Please tell us about the roots of THE ROSE?

LMD: I understand you all met busking?

Leo: Busking might be one of our roots, because when we started music, we really had a lot of chance to busk, or to stand in front of people. That's, I think the main root. We got into the music through British pop, which we really loved. Maybe Coldplay and The Script.

LMD: What was it in each other's performance styles that you admired that brought you together?

Sammy: I think the main thing was when we first met, we weren't looking into crazy music. I mean, like these days, there is so much music -- we respect it, too -- there's all this music with all these synth sounds, like EDM. We really wanted to give people and show people our original instruments. For example, we wanted to let them hear our just guitar, drums, bass, piano, with vocals.

Back when there were a bunch of bands coming out in America and Britain, they had original sound: Just with the band, that they could just sing and perform without any electrical devices. We just wanted to do that, ourselves. I think that was our main common thing we had together.

Leo: And the organic word is a really great describing word for us, because we really want to give the organic sound to own organic instruments to other people all around the world.

LMD: I appreciated the Beatles reference in the Like We Used To video, and I heard Coldplay when I first heard "Sorry". Then I found out you have actually covered Coldplay's "Yellow". Besides The Beatles and Coldplay, who are your musical influences?

Sammy: For me, when I was younger, it was Aerosmith, Led Zeppelin, AC/DC, right. Way back then.

Leo: As a band, maybe The Script. And lately, The 1975; they are a British act. We think that The 1975's music can actually affect us. We think they're really cool.

LMD: Tell us about the process of songwriting. How does a song begin?

Sammy: That's a really difficult question, because it's so different for each song. I mean, it's not one thing -- where we have routine that we do when we write songs. It just comes to us.

Like, for example, someone could just be like, "I've got this melody", and we hear it and we'll say, "That's okay, let's put a subject into it", and, "Let's go with this kind of guitar lines", and, "Let's put this kind of bass line". It's just so different; it's just inspirational.

Leo: But we definitely have the flame, the spark. When somebody sparks it, we all come up and give it the fuel, and make it bigger.

LMD: So one person starts it, and then everybody else adds their piece?

Sammy: Mostly, because we never get together and say…

Sammy: We don't say, "We're gonna write a song, and it's going to be about this". No, we would never do it like that. Whenever we're just hanging out, it's like, "Hey, listen to this; I came up with a guitar line", and someone will say, "Hey, that's the cool guitar line. What if I put something like this on it?" 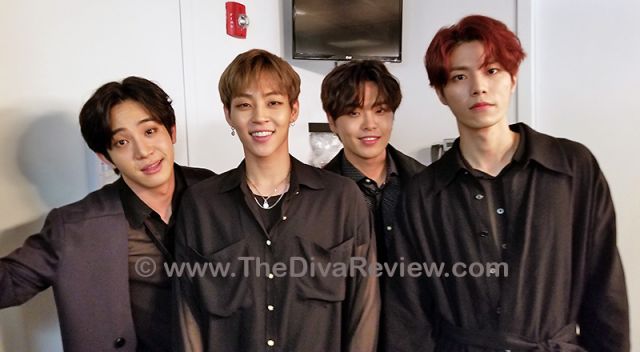 LMD: Well, there's a famous story about how back when The Rolling Stones were a cover band, their manager locked Mick Jagger and Keith Richards in a room and wouldn't let them out until they had written an original song.

Leo: We could do that, like one day. It would be interesting. We could get a room and say, 'Let's don't get out unless we have 10 songs out.'

Sammy: Yeah, but all those songs would be about how much we hate that room. 'Did someone lock this thing? Like Mick Jagger?' No, we would definitely curse that person out – with our music.

LMD: The group has already traveled across Europe. Tell us about the reaction you've received outside of Korea?

Jeff: We are so surprised and interested at how very passionate the overseas fans are.

LMD: What do you think international fans are connecting to?

Sammy: Our music, definitely. And one thing is, we can definitely speak English. But the biggest thing is our music.

Sammy: They memorise the Korean lyrics: That was crazy. They know all of it.

LMD: I think when people think of Korean pop music, they think of singing, dancing, non-instrumental groups. What is it like to be a rock band in the middle of the popularity of KPop?

Leo: Obviously, we respect them for it…

Sammy: No, no, no, of course, we respect them for it. We know that it's working. We know why it's good. But at the same time, we have something that we think is good, and that we think is going to work, so we are just going to keep going with that. And they inspire us, because when we see that, it's better to listen to different things.

For example, they have this in their music, we'll try that with our music. We'll put that instrument in, and see what we could come up with. So, the stuff like that, but we would never try to put our color away.

Leo: But we are really open to meet other groups, and talk, and get along. Because while doing that, we might get an idea about what's going to happen, and what is happening with us. It's a really good opportunity for us to get along.

LMD: What is the ultimate goal of THE ROSE?

Sammy: You know, just to share our music, to stay together as a band, have fun, enjoy.

Leo: I think our ultimate goal is saving THE ROSE. Saving THE ROSE and the Black Rose {Their fanbase}. THE ROSE is out now, and eventually we're going to do something. Like a flower, you've got to keep giving water, and sunshine, and nutrients; we have to do that. We've gotta do that in order to save THE ROSE and the Black Roses. So, that's our ultimate goal.

"[Interview] The Lady Miz Diva Meets The Rose"
by HanCinema is licensed under a Creative Commons Attribution-Share Alike 3.0 Unported License.
Based on a work from this source