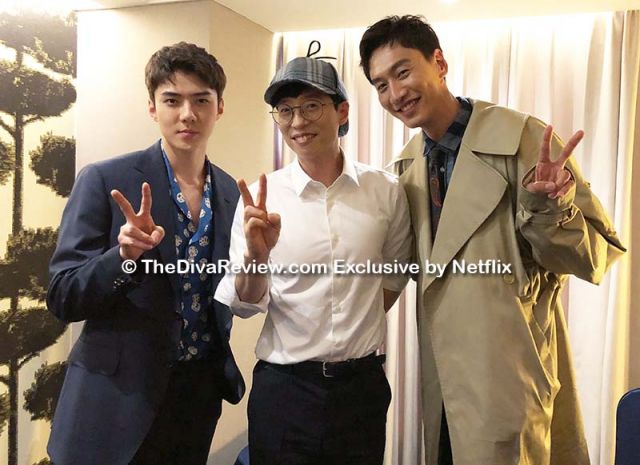 Two of the creators behind one of Korea's most successful varieties, RUNNING MAN, have produced BUSTED!, a new show that pits teams of celebrities against each other to solve a mystery. BUSTED! is produced in partnership with NETFLIX to be seen in 190 countries; a first for a South Korean variety programme.

In an exclusive interview with The Lady Miz Diva, South Korea's King of Variety, Yoo Jae-suk, his RUNNING MAN partner, Lee Kwang-soo, and Sehun of K-Pop's globally popular supergroup, EXO, sat for a hilarious and reveling chat about co-hosting BUSTED!, its new fun and challenges, and their feelings about meeting so many new fans around the world.

The Lady Miz Diva: What made BUSTED! different or special compared to other variety programmes? What made each of you want to be involved?

Lee Kwang-soo: First of all, I was cast in RUNNING MAN. The producer of RUNNING MAN, who gave me the opportunity to be in RUNNING MAN, told me there was a new, fun project, and I was offered the opportunity, and I love being with Yoo Jae-suk, as well. It was a great team, and I was really thankful. It's also a new challenge, and I thought that I would really be able to have fun with it. That's why I joined the project.

Sehun: When I first heard about this project, there are great, talented, more senior actors and entertainers, and I could really work with them, and so I really wanted to work on the project. And it's also Netflix, right? It's in 190 countries; that's a massive audience, and being able to participate in that, it was an honour for me, personally.

Yoo Jae-suk: I agree with what everybody else said, and I would just like to add on to that that I think the reason that I chose this programme was because of its newness. It's new. It's something that I haven't done before. And I can't say that it's completely new; there are aspects of other things that I've done, but they've put that together in a new way. And the 10 episodes that have been put together -- for me, I'm even curious as to how the 10 episodes look. We chose it because it was new for us, and we don't know if the viewers are going to feel the same newness. We're curious as to how the viewers will respond.

LMD: That actually leads into my next question. Because BUSTED! is being seen by a worldwide audience, thanks to NETFLIX, are you a bit apprehensive that there might be aspects of the show that international viewers might not understand?

LKs: Now, there are a lot of viewers watching it, and I think was a burden, but it was also something that we looked forward to; the great opportunity. Now, when we were shooting and being detectives in the episodes; for me, I wasn't really thinking about the global viewership, or that concern. I thought, 'Let's just have fun! Let's just have fun amongst ourselves, and I'll do my best.' I thought that naturally, you'll see us having fun and working hard, and then they'll really enjoy that. And we hope that we'll be able to share that spirit.

Sehun: This is the first time I've been in a variety. And to the viewers, thinking if they would have fun, would they enjoy it or not; to be honest, I didn't even have the wits to think that far. I just thought, these are all more senior hyung -- they're older brothers, they're my big brothers, right? I just didn't want to be a burden on them. That was my intention; I didn't want to ruin things for them. They were great; they made me feel nice and comfortable, and I was able to do well in the shots, and that was great.

YJs: As you mentioned, that was something that I didn't consider; that just because it's fun for us, itdoesn't mean it'll have the same global appeal, right? But if you think about it on the flipside -- let's say there's something really fun in the US, or another country; it's not a linguistic thing -- even if we don't speak the same language, we think that it's fun. So, that's what we believe about BUSTED!: We think it's fun for us, and it's something that we are certainly wishing and hoping for; I hope that it will be fun for the global audience. That's the attitude that we had, and we tried to make it as fun as possible.

LMD: Well, we know from RUNNING MAN that Mr. Lee is known as the King of Foul Play…

YJs: You got it right!

LKs: No, that's a misunderstanding! I'm not that way!

LMD: Amongst the three of you; what crime-solving skills are you bringing to BUSTED!?

YJs: Kwang-soo doesn't have any skills!

YJs: Hey, you don't know what you're saying. She saw RUNNING MAN, you can't be the brains!

LKs: You see, you see? Okay, you saw RUNNING MAN, so I guess you know who I am. Personally, I want to be a bit different from RUNNING MAN, as a detective. I want to show you the detective side of me, and you'll be able to see that in these episodes. And Diva, you can look forward to that, I can guarantee that. And don't be too surprised at how great I am. That's it!

LMD: I'm not saying anything…

YJs: Yep, that's right. That's the best answer; don't say anything. It's not even not worth responding to.

LMD: Sehun, as a member of EXO, you appeared on RUNNING MAN with Mr. Yoo and Mr. Lee, and INFINITY CHALLENGE, and other shows since the group's early days. You mentioned how great you felt to have them with you as you became a first-time host with BUSTED! In all those years having known them and worked with them as a guest, you seem to have a close relationship with them. I wonder how those men have changed, or your relationship with them has changed since you met them years ago?

Sehun: It's a very difficult question. As a member of EXO, now you can see the real side of me. I don't think before, you had a lot of opportunity to see the real me. There was always a script. There was always a concept that I had to fit: I had to sing, I had to dance according to that concept, but that's not the true me, right? Now, if you look at BUSTED!, you can see the real me as Sehun, and I think that's something that you can look forward to. And the reason I was able to be real was because of these big brothers, and they were really able to allow me to be myself. I hope that the global audience will be able to see a new side of me.

YJs: You can really look forward to Sehun. There are great things that you'll see in him. I really like Sehun. 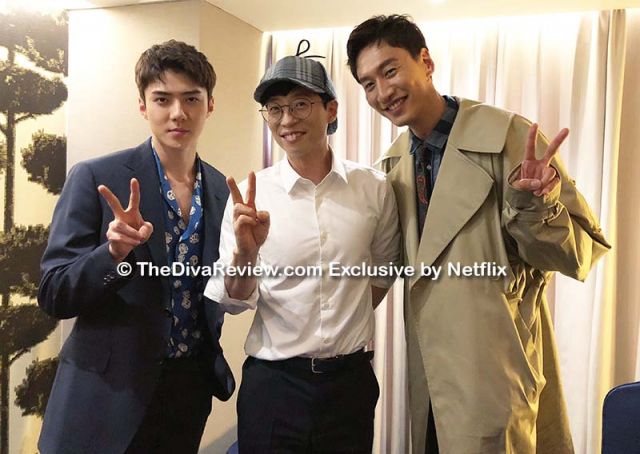