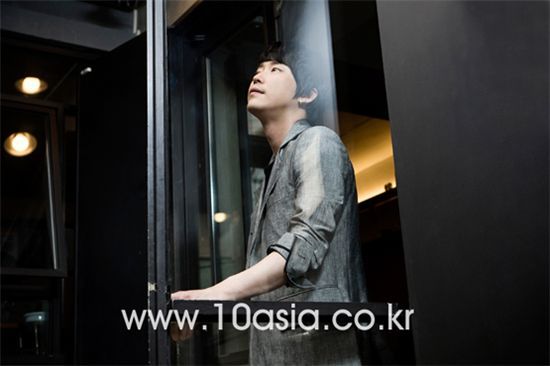 He caught a cold for the first time in ten years. He got a nosebleed on the last day of the show for musical "Monte Cristo" and does six interviews a day. He has 15-year acting career with scores of musical numbers under his belt but he recently jumped into films, a new sphere of acting he has never taken on before, and is experiencing everything from scratch. 10Asia sat down with Uhm Ki-joon, who after 21 musicals, four plays and eight dramas, has taken on his first big screen role in "Man of Vendetta".

10: I understand that you're not the type that usually does a lot of interviews so you must be extremely busy with promoting your movie. It must be your first time experiencing this as much as this is your first movie.
Uhm Ki-joon: Yes. I had heard there would be 'many' but I didn't know it would be like this. When I went to the press conference for "Worlds Within", questions were mostly directed to Hyun Bin and Song Hye-kyo so I had just sat there quietly...... I've done 15 interviews so far and will do another six tomorrow. I'm thinking of minor roles from now on. (laugh)

10: It's been exactly a year since you last said that you want to do movies that "Man of Vendetta" is coming out.
Eom: I got the scenario for it by the time "Worlds Within" was wrapping up and I told them that I'm interested but there was no talk of it after that for a while. And then it was around the time I was doing TV series "Hero - Drama" that CEO Jeong Hoon-tak made a decision. But just because he agreed to making it, it didn't mean that the director and producer had also agreed to it. (laugh) It was while I was doing musical "Killer Jack" that I met the director for the first time. So I waited exactly a year for the movie to happen.

10: I thought it had all been planned out but it looks like you were waiting on it the whole time. (laugh) Why did you want to do this movie so badly?
Eom: I'm still in the position where I have to be chosen. (laugh) The most fundamental criteria I look at when choosing a movie or drama is the character. I also tend to choose to play characters that I have never played before and my character as Byung-chul in "Man of Vendetta" is the very example of such a case. For the longest time, I've also had a yearning to play a role like Gary Oldman's in "Leon". I was able to reenact the role of a psychopath serial killer based on my imagination because he is someone who you rarely get to experience in life, even indirectly.

10: But throughout the movie, it was a bit disappointing to see that your character was a big fragmentary. The roles you had played so far always had a story of their own.
Eom: I actually used to say I wouldn't do roles that don't have their own stories but my character in this film doesn't need one. It actually becomes more risky for him to have a story if you take the entire film into consideration. I think it's more clean cut the way it is right now. And I personally believe that it's up to the audience to come up with a story for the characters.

10: It must've not been easy rehearsing for musical "Monte Cristo" because it overlapped with the filming for "Man Vendetta". I heard you even had a nosebleed on the last show in Seoul.
Eom: I think I caught a cold for the first time in 10 years. I was waiting for my cue on the last show and I felt my nose run so I wiped it, seeing it was red. Everybody ran to me, pressing my nose and blocking it. It was really hard trying to inhale it while singing and performing.

10: You had mostly performed in small or medium sized musicals for ten years and did big musicals starting in 2009. Are there any technical difficulties to that?
Eom: I've done three grand-scale musicals and of them, "Monte Cristo" was the hardest. With "The Three Musketeers", my character wasn't too expressive so it was relatively okay but the songs were difficult and expressions very detailed with "Monte Cristo". And it was even harder to relay those emotions to the third floor. I had to express myself well enough for a grand theater performance but I found my concentration breaking while trying to do that. My character had to express detailed emotions through his lines and reactions in "Monte Cristo" so it's impossible to do that just though my movements. So "Monte Cristo" was a musical that has a limit to how much emotion can be delivered when shown in a large theater.

10: That is why some people say it is best to watch performances you are in sitting in the first row. But this also means that you're not suitable for the large theater.
Eom: Emotional expression comes through the slightest look, expression and vocal tone of an actor but from the third floor, one will probably be only to hear that actor's voice. And it's not like you can set up a screen... Well, I guess it wouldn't be bad. If they got my bust shot on cameras on both sides of me, my tiny head would look big. Oh, but then they'd notice every mistake I make. (laugh)

10: That's why you're actually better for the small or big screen. At the same time though, it must've not been easy to start from the bottom in a new area after having been quite the ticket seller on the musical stage.
Eom: I'm better for the small theaters than large theaters and I think that's why it was easier to act in front of the camera. During my earlier experiences of going on the small screen, I was told that I adjust very quickly. I tried really hard so that I wouldn't get cut. (laugh)

10: What kind of efforts did you put in?
Eom: I said to musical actor Oh Man-suk that we must survive. And you can only do that by being talented so I did as much watching as I could. Even on days that I didn't have shoots, I would go on set and keep watching and I tried hard to become close with the crew. More than anything, you have to quickly learn what it is to act within an angle. But us actors can't help being quick at it. Things become hard if you're slow.

10: You played the bad guy in this film. And I'm sure there are many more characters you want to play because you're very avaricious.
Eom: I want to try a cheerful romantic comedy for the big screen and a special agent on the small screen. Like a policeman or public official who is high on drugs. I want to do something related to drugs. (laugh)

10: It's such an out-of-the-ordinary character.
Eom: I think something builds up inside of me, the larger the variety is to the characters I play, and I think that's what has gotten me where I am so far with acting. I know I should be able to do normal acting too but I think that's actually harder. That's why I think I should train myself with strong characters and then try playing ordinary roles. I still need to improve on my acting for the time being so I can't do those roles or the audience will be able to tell that I'm acting. (laugh)

10: It seems that your way of thinking is still focused on one's acting skills.
Eom: I think everything will become better once my acting improves. Acting is also the only thing that I know how to do and can do. If I was not able to act for some reason starting now? I might commit suicide.

10: But don't you have not enough time to look around if you focus on one thing so much?
Eom: That's why there is so much I don't know. I don't know slang or pop songs. And I don't know the existence of other dramas. that's why I talk a lot with my manager in the car. (laugh)

10: You said you want to do "Jekyll & Hyde" when you turn 35. You're 35 this year.
Eom: I said I would do it this year but they didn't ask me to. I think Mr. Shin Chun-soo still considers me as a young boy because he let me appear in a musical when I was very young. (laugh) I'll be doing a play called "Closer" from July to September and I've been begging to be given a role in a drama that I really want to do. (laugh) If I can't do the drama, I'll take a break. I like the sea and swimming so if I have to take a short break, I'll go to the East Sea and if I can take a long break, I'm planning on going to Thailand. I heard the South Sea is nice too but I have to drive there myself so it can't be too far away. (laugh)

Actor Uhm Ki-joon poses during an interview with 10Asia.

"[INTERVIEW] Uhm Ki-joon Man of Vendetta"
by HanCinema is licensed under a Creative Commons Attribution-Share Alike 3.0 Unported License.
Based on a work from this source