[Interview] "V.I.P" Jang Dong-gun - The Emotion Rises the More You Hide It 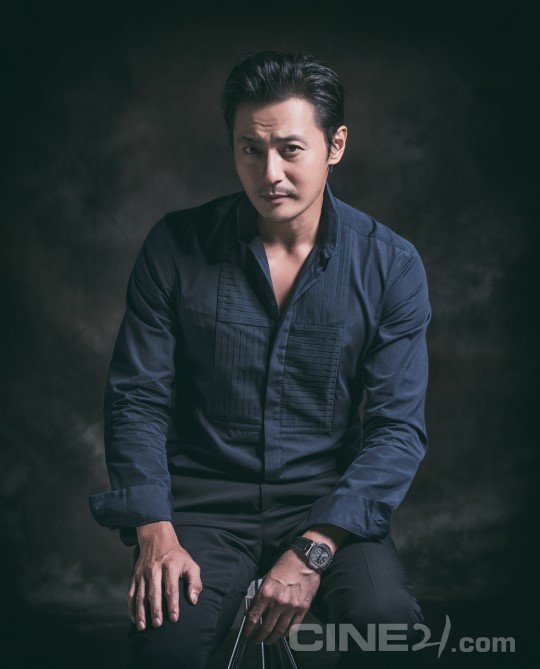 Actor Jang Dong-gun took out his vapor cigarette. It's been about 6 months since he quit smoking and started with his vapor cigarette about 2 weeks ago. He's famous for smoking only the concentrated 6mm cigs and said "This is not a cigarette, it just tickles your throat". about 1mm cigs. It's not just the type of cigarette he changed up, but also his taste in movies and the standard in selecting his work.

In the movie, "V.I.P", his character is Park Jae-hyeok, who is an earnest, uptight South Korean agent. Looking at his filmography, this character is very unlikely for actor Jang Dong-gun to take on.

A. I've been busy filming the movie, "Night of 7 years" and a Chinese drama back to back. In the beginning of this year, I decided to take a rest for my family as my wife Ko So-young was busy with her drama, "The Perfect Wife". Since our kid is still young, we don't feel comfortable when we are both working.

Q. Why were you attracted to play your character, Park Jae-hyeok?

A. I watched the movie, "Sicario" and enjoyed every moment of it. When the director said that he wants to make a movie like "Sicario", I was on board. All the other characters have their background story and show their emotions but Jae-hyeok's emotions are slowly revealed throughout the movie as he is pressured from the organization and stressed, being cornered.

Q. So was it your very purpose to wear glasses? In order to portray the complexity of your character?

A. Haha, well, when you are wearing a glasses, you can't really see their pupil but just the silhouette of the eyes. Since the characters are only described in the imagery rather than a long detailed description of their story, I think the director really wanted me to wear the glasses.

Q. Isn't this your first time wearing a glasses in a movie?

Q. Since your image changes according to the light reflected on your glasses, I'm assuming this was an important prop for your character.

A. It was a bit inconvenient at first as there was an obstacle in front of my eyes, making it hard to have an eye contact with fellow actors. But, I got used to it eventually.

Q. Wasn't it weird for you to see yourself playing such a dry and tired character?

A. There's two different face my character have, the past and the present. In the past, my character wears glasses and lose coat. In the present, I can see a killer-side of him. There's more scenes with the past me, but I think the viewers will be more familiar with my present self. It was fun to work with both.

Q. It must have been difficult to play a character whose emotion changes so rapidly?

A. There were some scenes where I thought I should show more emotion, but the director told me not to. In the scenario, the action and emotions are explained, and the viewers should be feeling the same wrath that my character is feeling at this point, so he wanted the natural approach to it.

Q. Normally you are the solo main character in a movie, so, how was it dividing that responsibility up with your fellow actors?

A. Mentally so much lighter and the fun was doubled. In the past, when I see a scenario that has 70% strength and 30% weaknesses, I thought of that 30% weaknesses very seriously but that type of thinking gave me a lot of regrets when I thought about it. So now, if there's even a bit of strength, I just focus on that (*laugh*).

Q. Your next movie is "Rampant"?

A. I'm playing an imperial official who dreams to be a king, and actor Hyun Bin plays the crown prince who is not interested in becoming a king. When I first read the scenario, I thought this movie was a lot like the Marvel movies, so I'm looking forward to filming.

"[Interview] "V.I.P" Jang Dong-gun - The Emotion Rises the More You Hide It"
by HanCinema is licensed under a Creative Commons Attribution-Share Alike 3.0 Unported License.
Based on a work from this source