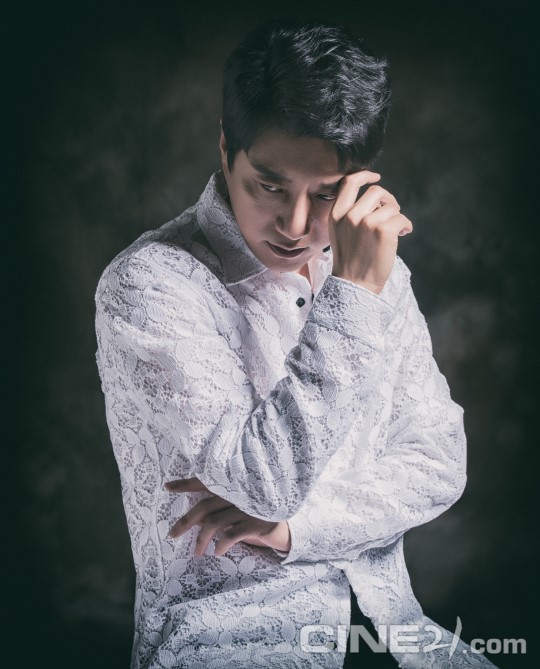 In the movie, "V.I.P", actor Kim Myung-min plays the detective, Chae I-do. He is an important role who have to catch the criminal. The type of detective who thinks unavoidable violent is forgivable if justice is being served. That I-do becomes the detective in charge for the nation-famous serial killing case. As he finds out that the suspect is the VIP from North Korea, he does not give up but persistently go after the VIP. In this world of violence, Kim Myung-min plays the toughest guy unlike his usual roles.

Q. In the dramas, "Immortal Admiral Yi Sun-shin" and "White Tower", you were the charismatic leader. However, I saw that you voluntarily became the mood maker in "V.I.P" advertisement press conference.

A. Somehow, I got an image of quiet, charismatic guy because of the roles I took. I just kept that image since people were respectful and polite to me because of it (*laugh*). I'm actually very outgoing.

A. I-do is a character who is the connecting bridge in the movie. The one who meets the 3 other characters and express his most honest emotions and show it in his action. For that, it was fun to play such character. Also, everyone had a very vivid roles and responsibilities in the movie. I just had to play the character "who have to catch". Even the director didn't give much directions to it, he simply said, "Come to the set and play".

Q. I assume that might be the most difficult directing to receive, to not do something.

A. What he didn't want us to do was to not get greedy. So, it made me feel comfortable. I'm about 50% engaged in my character when I enter the set. The other 50% is filled on the scene. If I come with 100% preparation, I have no room to take in the director's directions. I think my character becomes solid and gain life as I work with fellow actors and staffs on the scene. Only thing I wanted to decide before going in was "What difference can I put into this detective unlike other detective characters?" The most famous hot-blooded detective character is the movie, "Public Enemy"'s Sol Kyung-gu. I tried to deviate my character from his.

A. I put an extra effort in making my character unique. I didn't want anyone to think of any other detective characters while watching mine. At first, director talked about the U.S drama, "True Detective" and the main character who is cold and unfriendly, but I thought that seemed a bit depressing, so we changed it up. I-do must have depressing background story too, but I think I-do is more of a cocky one, rather than a depressing one. Also, Sol Kyung-gu's detective character might have been rough but still human, but I-do is a detective who only walk on his way.

"[Interview] "V.I.P" Kim Myung-min - Without Hesitation but Renewed "
by HanCinema is licensed under a Creative Commons Attribution-Share Alike 3.0 Unported License.
Based on a work from this source