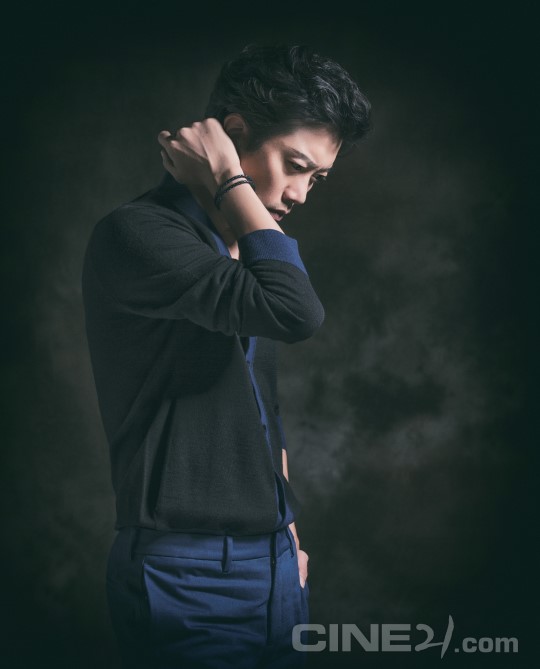 Q. I think all the four main characters have a vivid role in this movie as each of them were given a specific chapters for it. What type of role does your character Ri Dae-beom play?

A. The introductory role, the one who opens the door. After showing a charismatic character in the beginning, he suddenly vanishes. The viewers will be curious thinking where he would be. Someone who gives a thrilling pressure even though he is hidden behind a veil, I thought such characters were only seen in foreign movies. I thought that if I do a good job, I could create a character rare to be seen in Korean movies.

A. North Korean agent characters until now, have always been someone with unbelievable strength and skills, which often leads to an independent solution to all. However, Ri Dae-beom is a realistic character who invested a lot of time and effort, sorely focused on catching Gwang-il. He is a sharp agent, yet he possesses a humanly warmth in him too.

Q. As I looked at the scenario, there's a lot of scenes where Ri Dae-beom witnesses brutal sights. It probably took you much pondering in finding the right amount of emotion into the reaction.

A. In the beginning where he is determined to catch Gwang-il, he is passionate and intense. However, as Gwang-il's savage ways continue on, the scenes become more and more barbaric. As Dae-beom patiently wait for the right moment to catch Gwang-il, he becomes exhausted as a human being. So, I tried to portray that exhaustion into his reactions. His desire to catch Gwang-il gets bigger each time, so his eyes are still blazing with fire, however he becomes colder and more logical in order to be successful. Like fishing.

Q. Since this character doesn't have much part in the movie, did you think of making the character more intense and impactful?

A. The director mentioned that he doesn't want too much theme in this character. He said that the editing will complete the rest, so, me as the actor needs to loosen up a bit. In the beginning, when he appears, his true color shows, so it was easy to loosen up afterward.

Q. I heard that the director forbid you from many things including not even letting you put on a moisturizer on your face?

A. Yeah, even at the tiniest amount of moisturizer on my face, he asked why is my face looking so hydrated (*laugh*). Along with that, we tried to show the evidence of time with scars on the face and what not, so, even without a detailed background story, you can read that story off of my face. In the movie, my facial expression is often exhausted and dead. Lost a lot of weight too.

Q. It's been 27 years since your debut. Do you have a particular thing you have your eyes on?

A. Lately, I try to take on as much work as I can even if it is a bit pressuring. Not caring about the significance of the role, I just want to be a part of a good movie. Also, it is difficult to have all the major league actors and actresses in one movie. I'm learning a lot from others from all the works I do. I was always curious about how other actors portray their characters and what kind of conversation they have with director on the set.

Q. The movie "The Fortress" will be released soon and movie "1987: When the Day Comes" is still filming.

A. I was the only warrior character in the movie "The Fortress". I wore winter clothing, which was very heavy, and when I fight with swords, I started to sweat so much. It was a neat experience because it was so cold in winter, yet my body was always hot. In "1987: When the Day Comes", I'm the detective who tortures actor Yeo Jin-goo. I think I'm going to receive much hate from his fans (*laugh*)"

"[Interview] "V.I.P" Park Hee-soon - Let's Loosen Up A Bit"
by HanCinema is licensed under a Creative Commons Attribution-Share Alike 3.0 Unported License.
Based on a work from this source