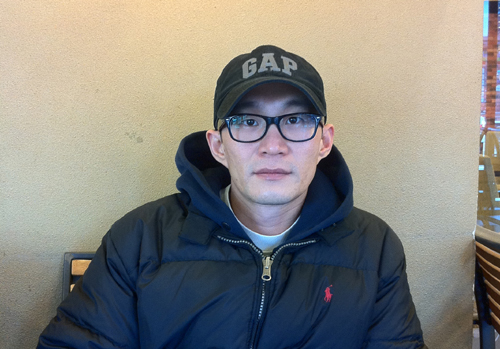 KOBIZ:The film is about stories and storytelling, with "Alice in Wonderland" connotations. What made you think of it?
LEE: After I finished working on director Hong Sang-soo's "Like You Know It All", I started working in earnest on my own script, something I had wanted to do for a while. But I had a hard time because I didn't have a story. So I decided to start with myself, and create a story about a man without a story, then a man who tries to commits suicide because he doesn't have a story, and from there I was able to think up all sorts of details. There are a lot of stories floating around, and some are rumors that can have serious mental effects on their victims. One of the characters is in that sort of predicament.
KOBIZ: What about thecyclical structure of the story?
LEE: I saw a drawing by Escher called "Drawing Hands" and thought I could structure the film with that sort of nuance. [Note: Dutch artist M.C. Escher's "Drawing Hands" shows a pair of hands coming out of a piece of paper, paradoxically drawing one another into more detailed existence.]
KOBIZ: The film was produced by Bori Pictures but planned and presented by Cine21i, and Yim Soon-rye (director of "Forever the Moment") was a producer on it. It also won an Asian Cinema Fund. Tell us about that and the budget.
LEE: Cine21i had a project contest to discover newcomers. The winning project got KW50 million (US$45,000) and Yim Soon-rye would produce it. They judged the scripts without knowing who wrote them. Busan's Asian Cinema Fund post-production support in cooperation with KOFIC helped finish the film. Because of the budget constraints, I went over the script and condensed it a lot. We shot it over 16 days around Cheongpyong in Gyeonggi Province. Producer Yim Soon-rye met with me to discuss important parts but mostly entrusted the film and the script to me.
KOBIZ:You might have won the Cine21i contest because they didn't know you were a Hong Sang-soo AD. Do you worry at all that it might prejudice people against your style?
LEE: There were actually other contests I failed at, that didn't take the directors' names off the scripts. I worked on his films "Like You Know It All", "Tale of Cinema", "Woman on the Beach" and "Ha Ha Ha". I didn't know I'd work with him for so long, but I have such respect for him. The environment [for independent filmmaking] isn't good, but he is always making good films somewhere and that gives me heart. He keeps making films not for money or fame, and I would like to be like him in that sense. But in the end, we are different people and if I keep making several films, our different colors will become more apparent. It might be because I've only made one film so far [that we seem similar]. One of the things I learned from him is that he never has any needlessly consuming factors on set. Just the really necessary number of people, and they all go forward with the single aim of making a good film. I've learned not having a lot of money condenses things, too, and helps you see what's really important.
KOBIZ: So how have the screenings been going in Rotterdam?
LEE: This last screening was sold out in a 400-seat IMAX cinema and that brings the total count to about 1,000 people that have seen it here. [More than some independent films on release in Korea.] They seem to respond well to the film and they laugh a lot, the same as in Korea, and the atmosphere is good at the Q&As.
KOBIZ: What's next for you?

LEE: The film is going to open in theaters in Korea on March 8, so we're preparing for that. I'm also working on my next project. I can't say much about it yet, but there are a few words that draw my curiosity and I'm developing a story out of that.