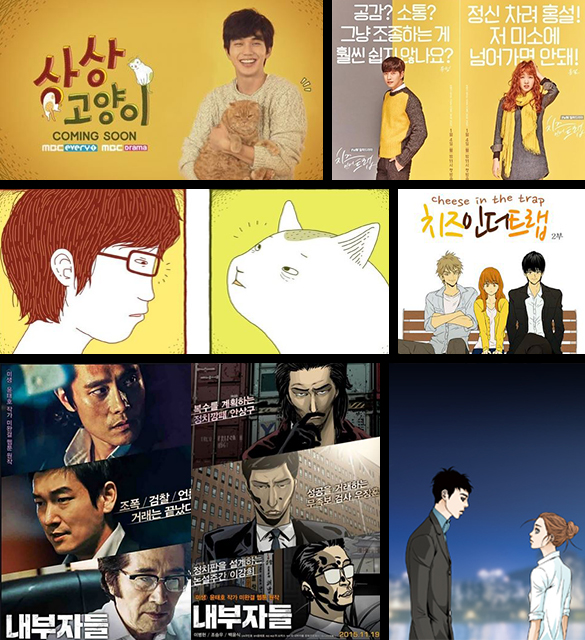 You may not all be familiar with webtoons or webcomics but you have definitely encountered webtoon adaptations over the past couple of years if you're a fan of Korean dramas or films. While they haven't taken the world by storm (yet), they are massively popular in their home country of South Korea, where 1 in 3 people read webtoons on a weekly basis. It's a common sight to see people reading episodes of their favorite series on their daily commute and there are many reasons why. Webtoons are portable since they are easily accessible through your phone and the format is visually engaging. When done right, a webtoon series contains a story world filled with interesting characters that you can get emotionally attached to but at the same time it doesn't demand a huge commitment from readers. All series are broken down into succinct episodes that you can read at your own leisure.

The South Korean entertainment industry has taken notice and over the last decade many webtoons have been made into films and television dramas. Popular films such as Secretly, Greatly (Movie "Secretly and Greatly"), and the current box office hit, The Insider are all based off of popular webtoons, as are the current dramas The Imaginary Cat (Drama "Imaginary Cat")and "Cheese in the Trap". This year's drama line-up also includes other adaptations such as "The Idle Mermaid" which is based on the webtoon Cat and Dog.

This trend will likely continue because webtoons are a treasure trove of original stories. They come with an established fanbase and the format itself is a narrative and visual map that the producers can use as a foundation. As Korean films and television series continue to gain overseas fans, could they succeed in bringing a spotlight to webtoons as well?

Companies are beginning to realize that webtoons can appeal to broader audience outside of Korea, both as a format and as an already established database of stories that are ready to be turned into other content. There are an overwhelming number of webtoons that have a depth of imagination that could get any reader hooked and it may be time for the world to realize the potential of webtoons. Established webtoons are now being translated and released into the foreign markets and emerging artists in other countries like the U.S. are taking up the format to create works of their own. Many hope that it will have the same kind of success and growth that it is having in Korea. What do you think about the future of webtoons?

Check out some titles over at Spottoon and see which webtoons you'd like to see adapted next!

"[Introducing Spottoon] Webtoons as the go-to source material for Korean dramas and films"
by HanCinema is licensed under a Creative Commons Attribution-Share Alike 3.0 Unported License.
Based on a work from this source