"Iris 2" is on a different scale 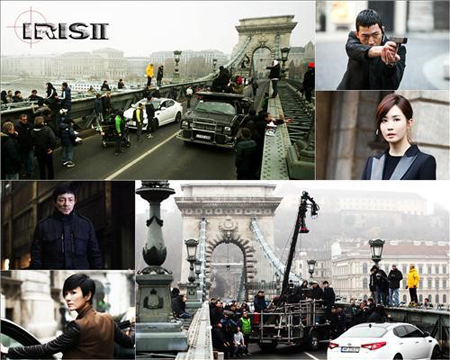 Upcoming KBS 2TV drama "IRIS 2" is currently in the making of a blockbuster in Hungary. The team left for Hungary on the 21st and has been through Szecheny bridge in Budapest, a well known landmark to film an action scene.

This is way beyond the first "IRIS". It was hard to control even one lane of the bridge back then. The drama's amazing response the first time allowed Hungary to maintain its tourism rate too. Hungary is therefore supporting this drama with all they can.

The crew claim they are going to create an action scene even better and thrilling than the Incheon bridge scene in "ATHENA" Goddess of War".

"IRIS 2" is about to travel to Cambodia, Japan and other foreign locations to create a bigger scale and visual. To be aired on the 13th of February in 2013.

""Iris 2" is on a different scale"
by HanCinema is licensed under a Creative Commons Attribution-Share Alike 3.0 Unported License.
Based on a work from this source