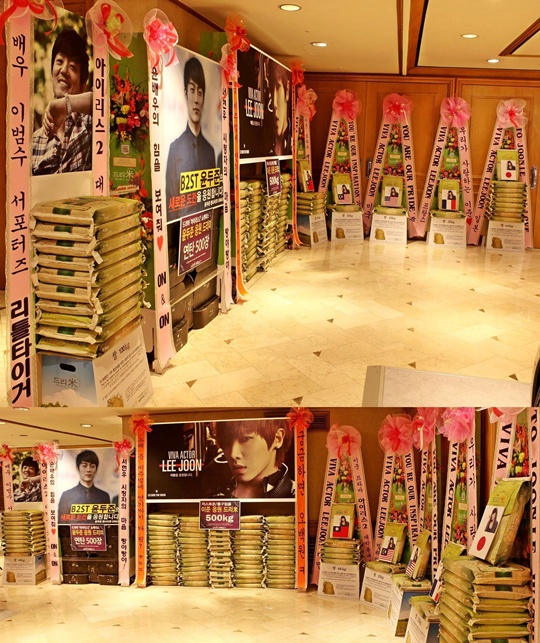 Fans of Lee Joon and Yoon Doo-joon from MBLAQ and Beast wished them all the best for the upcoming KBS 2TV drama "IRIS 2" and presented rice wreaths.

The "IRIS 2" Showcase was held in the Grand Ballroom of the Ritz Carlton. Lee Beom-soo's supporters Little Tiger sent a wreath of rice as well and wreaths of rice and coal from fans of Lee Joon and Yoon Doo-joon filled the ballroom.

The rice and coal sent by these fans will be donated to the poor, supporting them with meals and warmth for the winter.

These fans have continuously been sending rice and coal wreaths to events like these and donating them to those who need it.

Meanwhile, "IRIS 2" is going to deal with Lee Byung-hun's death from "IRIS" in 2009 and Kim Young-chul who was arrested for unofficial Iris actions. Mr. Black, the man behind everything will also be revealed.

The cast of "IRIS 2" which is going to be shown for the first time in February next year has a cast of Lee Da-hae, Lee Beom-soo, Oh Yun-soo, Kim Seung-woo,Im Soo-hyang and more.

""Iris 2" showcase, Lee Beom-soo, Lee Joon and Yoon Doo-joon's rice wreath"
by HanCinema is licensed under a Creative Commons Attribution-Share Alike 3.0 Unported License.
Based on a work from this source