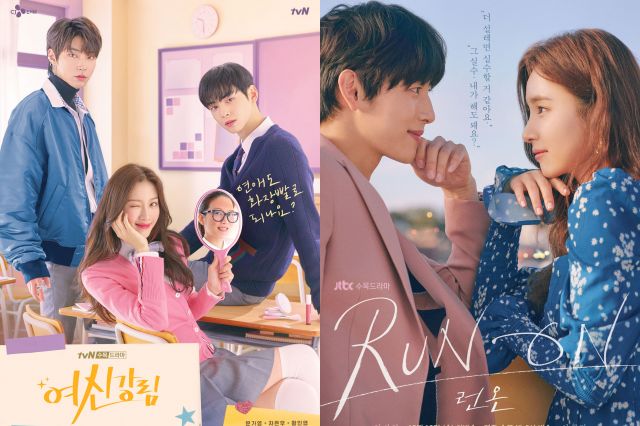 With the holiday season coming up soon and the pandemic keeping people isolated, it is quite natural to miss your loved ones, friends, and family, especially if you're far away from each other and cannot possibly meet safely during this time. If you're caught up in your feelings and missing your significant other, here are 10 K-Dramas you can watch to alleviate the pain.

"Thirty But Seventeen" is one of those dramas that stays with you long after it's over. The beauty of innocence that this drama portrays will leave you feeling warm and giddy inside. Starring the inimitable Shin Hye-sun and Yang Se-jong in the leading roles, there is no comparison to how tastefully wholesome this story is. All the actors do an incredible job at their roles, which adds to the immersion. If you can't be with your beloved in person, I suggest you plan a little Netflix date and watch it together.

"True Beauty" will bring back all the sweet memories of your high school days in a flash and if you happen to have met your significant other at school, this is the drama for you! Relive the playful push and pull of first love in this drama starring Moon Ga-young, Cha Eun-woo, and Hwang In-youp and by the time it's over, you'll be happier than you were when you started.

This drama is all about patience and submission to the uneven pace of time. If you find yourself troubled by how much you long for someone, this drama will soothe your heart into the understanding that no matter the time or distance, love always finds a way. The drama stars two of the loveliest actors, Seo Kang-joon and Park Min-young in the leading roles who could not have been more perfect for their characters.

"Find Me in Your Memory"

"Find Me in Your Memory" is a slow-burn romance that takes its sweet time to build the plot and relationships, giving them depth and dimension. However, it is not the least bit dull or lackluster. Moon Ga-young is truly brilliant as Yeo Ha-jin alongside Kim Dong-wook's Lee Jeong-hoon, who make for the perfect couple to make your hearts flutter.

If you're in the mood for love and comedy or comedy in love, "18 Again" would be your best bet.

The drama is based on the 2009 classic Hollywood film "17 Again" where a middle-aged man miraculously goes back to his 17-year-old body. However, the world around him hasn't changed, giving rise to all sorts of chaotic situations. Lee Do-hyun delivers one of his best performances in this drama alongside the incomparable Kim Ha-neul, who is perfect as always.

"Shopping King Louis" will not only take your mind off of the pandemic blues but will also leave you in fits of laughter as you adore the leading couple Louis and Go Bok-sil's fateful romance. What makes this drama so great is the lack of dramatic ups and downs or burdensome conflicts. Seo In-guk and Nam Ji-hyun ooze enviable chemistry and you'll definitely be reminded of your honeymoon phase with this drama.

"When the Camellia Blooms"

Would you like some romance, comedy, mystery, and suspense on your watch list? "When the Camellia Blooms" is the drama for you! Starring Kang Ha-neul and Gong Hyo-jin, this drama presents a romance that is both dreamy and mature at the same time. After all, one doesn't have to be "young" to experience the butterflies of young love. A fair warning in this regard however is that Hwang Yong-sik and Oh Dong-baek might just raise your standards of how you'd like to be treated in a relationship higher than ever, which is all the more reason to virtually watch it together with your significant other.

"Coffee Prince" marked quite the cultural reset in K-Dramas at the time of its release and continues to be an incredibly significant piece in the history of the Hallyu wave. It tells the story of a group of young people who navigate their hopes, dreams, and feelings as they work together at a cafe. With an extraordinary cast including Gong Yoo, Yoon Eun-hye, Lee Sun-kyun, Lee Dong-wook, Chae Jung-an, and more, "Coffee Prince" is definitely a must-watch.

Starring Shin Se-kyung and Im Si-wan, "Run On" tells the story of a young man and woman who meet each other at a very critical point in their lives and change for the better while embracing their own flaws. It places great importance on partners learning each other's love language and establishing a healthy relationship on the foundation of mutual respect and adoration. "Run On" deserves way more appreciation for its portrayal of a modern-day romance that's still as chivalric as the old-school type of love we tend to fantasize about.

Two of the most talented actors in the Korean entertainment industry, Cho Jung-seok, and Gong Hyo-jin come together in this drama to create the most admirable romance ever. Not only does "Incarnation of Jealousy" bring awareness to a serious medical condition that needs attention but also builds a beautiful romance around it in a respectful manner. However, the highlight of the plot lies in its love triangle, with Go Kyung-pyo in the mix. If you want to feel the excitement and nervousness of gently yet surely falling in love with someone, "Incarnation of Jealousy" will be right up your alley.