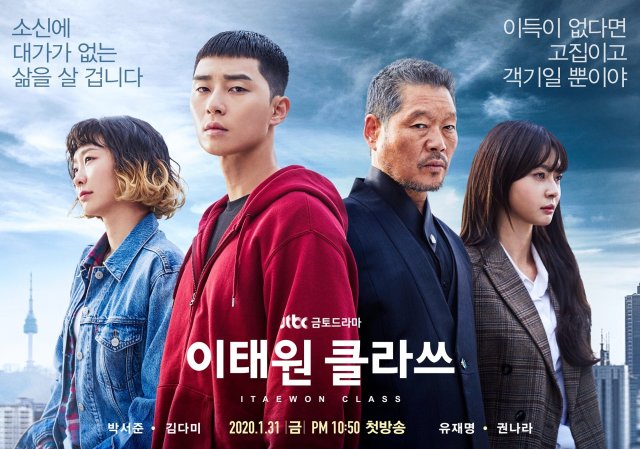 Based on a webtoon of the same name, "Itaewon Class" is about a 'hip' revolt by stubborn and courageous youths living in this unfair world. It contains the starting of businesses of those who pursue freedom with their own values on a small street in Itaewon.

PD Kim Seong-yoon, who has been acknowledged for his sensational work in "Moonlight Drawn by Clouds" and "Discovery of Romance" is in charge, and the original writer Kwang-jin writes the scenario.

In the poster comprised of four characters, everyone is with their backs turned around Park Seo-joon and Yoo Jae-myung. Park Seo-joon takes on the role of Park Sae-roy, who brings on the challenge to Itaewon, and sociopath and SNS star Jo I-seo is played by Kim Da-mi.

Yoo Jae-myung tackles the role of Jang Dae-hee, the chairman of a food company that Park Sae-roy looks to as his goal, while Kwon Nara plays Oh Soo-ah, Park Sae-roy's first love.

""Itaewon Class" Releases Tense Poster of Park Seo-joon, Kim Da-mi, Yoo Jae-myung and Kwon Nara"
by HanCinema is licensed under a Creative Commons Attribution-Share Alike 3.0 Unported License.
Based on a work from this source