IU "I told my mother about my drama and she" 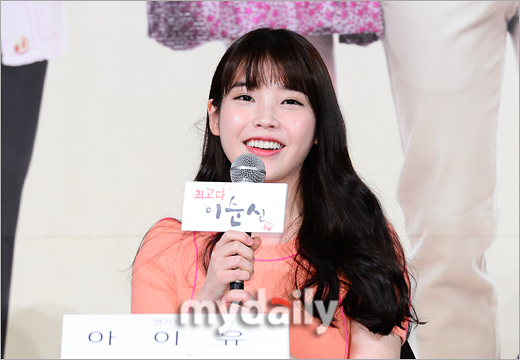 Singer and actress IU got the question, "How was your family's reaction when you told them about your drama casting?" at the press releasing event of the upcoming KBS 2TV weekend drama, "Lee Soon-sin is the Best".

She answered, "My mother and grandmother love weekend KBS dramas. My mother said, "How can I see you after watching Lee Bo-young?" and I told her that Soon-shin also becomes prettier later".

"I told her that the character is quite pathetic at first -- my family supports me a lot".

IU takes on the role of Lee Soon-shin. She was the loner out of the family of two sisters but she earns a turning point in her life thanks to a man named Sin Joon-ho.

Meanwhile, "Lee Soon-sin is the Best" is about a mother and her daughters struggling to get life back and find happiness after the sudden death of the father. To be aired for the first time on the 9th, this month.

"IU "I told my mother about my drama and she""
by HanCinema is licensed under a Creative Commons Attribution-Share Alike 3.0 Unported License.
Based on a work from this source