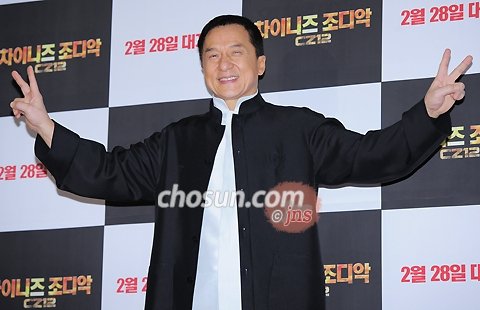 Jackie Chan visited Seoul on Monday to promote his latest movie "12 Chinese Zodiac Heads", which he produced, directed and starred in. He also talked about his experience of working with Korean actor kwon Sang-woo and singer Yoo Seung-jun.

The 59-year-old, who made a name for himself performing his own stunts in movies like "Drunken Master", "Armor of God" and "Rush Hour", said he was impressed by Kwon's passion and determination, as he also avoided using a stunt man for many of his stunts despite injuring his ankle along the way.

Chan said he was also surprised at how quickly Kwon mastered his lines in both Chinese and English, even though Chan suggested he act in Korean due to his lack of experience with foreign languages.

The action movie, which will be released here on Feb. 28, revolves around the protagonist's search for 12 ancient Chinese bronze statues that have been scattered across the globe. Chan said the script was inspired by the story of a bronze statue that was traded in Hong Kong in 2000. The movie took seven years to make and cost W100 billion (US$1=W1,083).

"Jackie Chan Hails 'Stuntman' Kwon Sang-woo in New Movie"
by HanCinema is licensed under a Creative Commons Attribution-Share Alike 3.0 Unported License.
Based on a work from this source