Jang Dong-gun, "Kim Min-hee wakes up by herself" 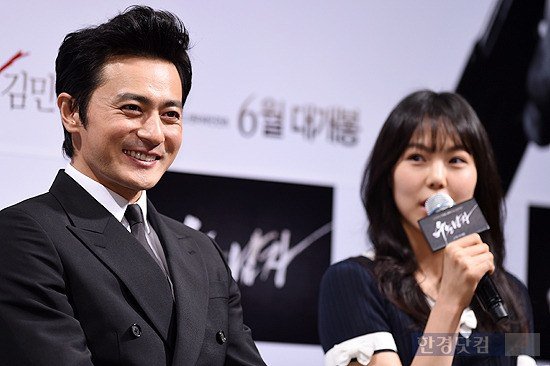 There was a press conference for the movie "The Crying Man" at Gangnam CGV on the 8th.

Jang Dong-gun talked about Kim Min-hee, the actress he's co-starring with on "The Crying Man". "Mo-kyeong and Gon don't meet often in the film, but he changes in spite of her, so I had to know a lot about my co-star".

"Looking at Kim Min-hee from the public's point of view, she is an actress with a lot of potential who still has a long run coming".

Netizens say, "She's good enough for him to say that about her", "They look really close" and more.

Meanwhile, "The Crying Man" is about a man who was abandoned as a child, then grew up to become a killer and finds a woman to carry out his next mission, but falls into a predicament. To be released in June.

"Jang Dong-gun, "Kim Min-hee wakes up by herself""
by HanCinema is licensed under a Creative Commons Attribution-Share Alike 3.0 Unported License.
Based on a work from this source