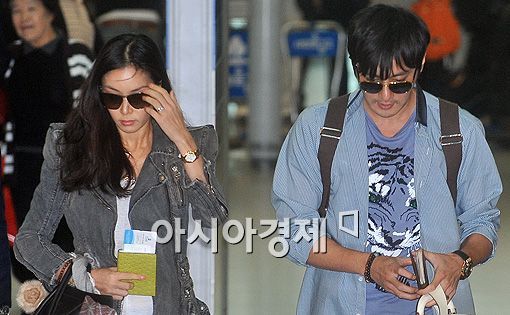 It appears that Hallyu star Jang Dong-gun will have more time to invest in his new family as the shooting for his film "My Way" has been delayed until the fall.

A source close to Jang -- who married Korean actress Ko So-young on May 2 -- said that he was scheduled to start shooting "My Way" in early July but it has been pushed back until "sometime after October".

The source went onto say, "Since he doesn't have any major work commitments till then, I think he will focus on prenatal education", referring to the baby that Ko is fourth months pregnant with.

"My Way", directed by Kang Je-gyu of Jang's 2004 blockbuster hit "Taegukgi", is about an Asian soldier who was captured by the Japanese army and later turned over to the German Nazis during World War II.

Korean actress Son Ye-jin has been cast as the female lead while producers are also said to be talking with multi-talented Japanese star Kimura Takuya.

Last January, Jang had undergone knee surgery for the film and there was even talk that he had moved up his wedding to May in order to start working on "My Way" in July.

Jang, one of Korea's top actors who has starred in numerous television dramas and movies, has been making headlines with his personal life over the past few months.

The famously private actor surprised the country last November when he went public with his two-year romance with Ko, his co-star in the 1999 film "Love Wind, Love Song".

The announcement immediately spread rumors of an impending marriage although it wasn't until March that Jang officially told his fans at a fan meeting that he would be marrying Ko in May.

After months of media frenzy leading up to their nuptials, the two tied the knot last Sunday in an extravagant wedding ceremony which was attended by their A-list celebrity friends, swarms of reporters and fans from around the world.

They are currently on their honeymoon in Bali.

"Jang Dong-gun pic "My Way" delays shooting till October "
by HanCinema is licensed under a Creative Commons Attribution-Share Alike 3.0 Unported License.
Based on a work from this source