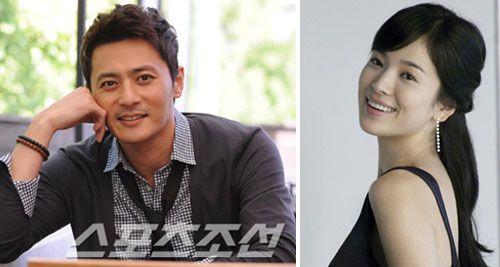 The chiseled features of actors Jang Dong-gun and Song Hye-kyo are the most popular models for plastic surgery, a straw poll suggests. Job search site Career polled 638 workers and the biggest group of men chose Jang and biggest group of women Song.

Some 11.9 percent of the respondents said they had or plan to have plastic surgery in the summer vacations this year. Nearly half said they had surgery for the sake of a better chance at promotion or a better job. In a multiple-answer question, 71.6 percent of the respondents answered the purpose of plastic surgery is to boost confidence and self-satisfaction. Some 56.9 percent said they had or would have surgery for marriage or to find love, while 47.4 percent said surgery did or would bring smoother interpersonal relationships.

In another multiple-answer question, 27.6 percent said they would most want plastic surgery on their eyes, and 21.6 percent on their nose. Facial contours or jaw line were chosen by 19 percent, skin and wrinkle care by 18, liposuction by 15.5 and dental braces by 14.7 percent.