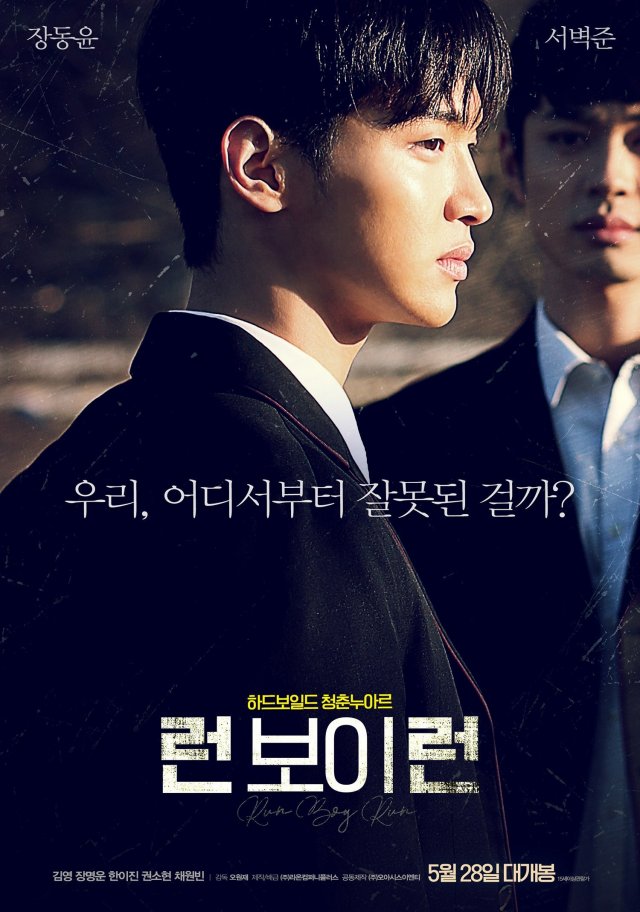 "Run Boy Run" starring Jang Dong-yoon confirmed its release date to May 28th and released a special poster as well as some stills. "Run Boy Run" is about Do-won (Jang Dong-yoon), who used to be a rising sprinter, transferring schools after an injury, meeting his childhood best friend Jin-soo (Seo Byuk-joon) and getting involved in unexpected cases. This hard-boiled youth noir is about the growth of youths.

The film is directed by Oh Won-jae, who was a supporting director and director of single and feature-length independent films, drawing attention from Busan International Film Festival and Jeonju International Film Festival. Drawing attention through his upcoming works such as the SBS drama "Joseon Exorcist" and the OCN thriller "Search", which is based in the DMZ, actor Jang Dong-yoon appears as Do-won, a high school student who used to be a promising sprinter, but faces a crisis after being injured and his father becomes bankrupt. Seo Byuk-joon from "The Great Seducer", "Let's Eat - Season 3", "Home for Summer" and "A Daytime Picnic" takes on the role of Do-won's friend Jin-soo, portraying the wavering of youth. Kwon So-hyun from 4Minute who completely transformed into an actress is appearing with a new image.

Jang Dong-yoon and all other actors, who decided to appear in the movie to add strength to a low-budget film, reportedly performed enthusiastically in the freezing weather, biting ice and cold water to prevent cold breathing, as the film was filmed in December.

The special poster captures the atmosphere of the movie with the image of Do-won agonizing over the endless swaying road of youth, while the copy saying "Where did we go wrong?" and the divergent gazes of Jin-soo and Do-won on the side of the poster herald an unpredictable friendship between the two young people.

The "Run Boy Run" stills, which were released together, draw attention to Do-won's expression, which is full of tension just before running, and his uncomfortable and lonely look from inside the car. For a brief time, it looks like he's having a good time with friends in a comic book cafe, but the scene where Do-won and Jin-soo look at each other while grabbing each other by the collar makes us wonder what happened between the two. In addition, the story of young people who endlessly sway, as seen in the image of Do-won running forward, leaving the essence and pursuers leaning against the wall behind, and the friendship between the two arouse curiosity.