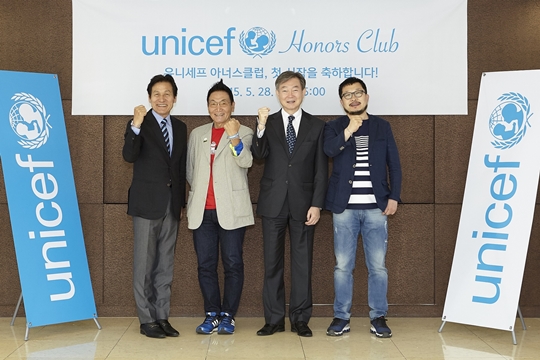 The inauguration ceremony of the club took place in the office of Korea Committee for UNICEF in Chongro-gu, Seoul in the afternoon on this day.

National Ambassador with UNICEF Ahn Sung-ki has been working for the last 20 years to promote various events and activities by UNICEF.

Kim Ildoo, chief of World Wide Charity for Children has been donating since 1999 for children worldwide and pledged to donate his house in Hannam-dong in 2012.

Joo Pil-ho, CEO of the production company of movie, "The Face Reader" donated part of the revenue from the movie to UNICEF and will continue with the donation.

UNICEF Honors Club will continue with their efforts to find new members and proceed with the various promotional activities including field trips to visit the project sites by UNICEF.

Seo Daewon, Secretary of Korea Committee for UNICEF said, "Honors club invite the donors who donated a lump sum amount of over 100 million won as well as the donors who pledge to donate the accumulative amount to reach the goal. We hope we can attract the heartwarming participation from more donors through the active promotion by the current members of the honors club".