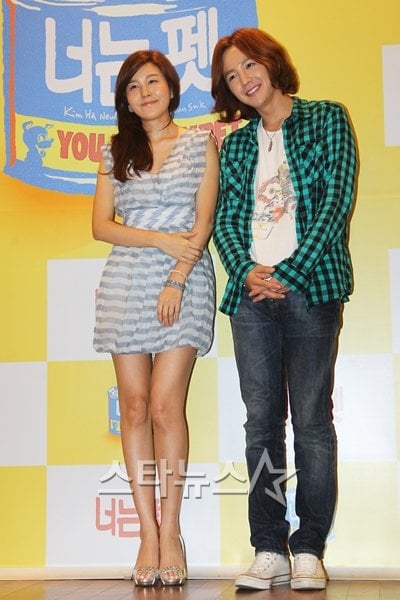 Movie "You Pet" by Jang Keun-suk and Kim Ha-nuel will be released in Japan next year January.

Japanese newspaper Sankei Sports reported that romantic comedy movie "You Pet" will be released in Japan in January after Korea on the 11th. The two main actor and actress will visit Japan for promotions.

This movie is about the relationship between a career woman who is poor at love relationships and a younger guy who becomes her 'pet'. The filming was supposed to take place in Japan last May but was cancelled due to the massive earthquake that happened in Japan 8 days after the press release.

Jang Keun-suk, who is being known as the leading Hallyu Star donated 10 million Yen and 5000 sheets of blankets at that time.

After filming the movie in Seoul, Jang Keun-suk and Kim Ha-neul didn't forget a message for the fans as well. Sankei Sports showed great interest got hold of their pictures and released it on the online celebrity main, claiming to be exclusive.

In their message the actor and actress said, "We are disappointed we couldn't continue our shooting in Japan like we prepared to. We hope we can give you health and courage by meeting all of you in Japan through the screens".

"Jang Keun-suk and Kim Ha-neul "You Pet" released in Japan next year"
by HanCinema is licensed under a Creative Commons Attribution-Share Alike 3.0 Unported License.
Based on a work from this source