Jang Keun-suk Defends Slavish Portrayal of Men in 'You Pet' 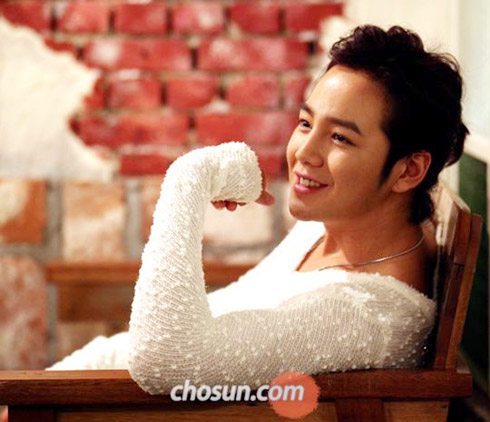 A Korean men's association has recently filed a legal petition to suspend screenings of "You Pet", a film the group has taken offense with due to its portrayal of male-female relationships. In the movie, gender relations are shown on par with that of a pet owner and her dog, they claim, calling this is "an insult to men's dignity as human beings".

In the film, a highly-educated single woman in her 30s played by Kim Ha-neul lives with a younger dancer played by Jang Keun-suk. In exchange for accommodation and food, the young dancer calls the woman "master" and loyally obeys her. The movie is based on a Japanese comic book that was hugely popular in Japan and Korea.

Upon hearing the news, Jang, 24, said, "Why wouldn't you be able to be like a pet if the woman is older, more capable, and the whole dinner menu changes when you please her?"

He said that men shouldn't take umbrage due to feelings of wounded pride. "You aren't always charming if you stay proud all the time", he said.

However, the film can hardly be said to have broad, cross-spectrum appeal. As a romantic comedy that lacks traces of both, it is expected to gain a following among Jang's fans but may struggle to find mainstream success.

"When I first read the script, I thought it was perfect for me", said Jang, who sings, dances and courts favor throughout the flick. "The slick and playful character matched my personality so much that I didn't have to think too hard about it".

Next year marks Jang's 20th year in showbiz. He debuted at the age of five as a clothes model.

"My childhood was quite different from other people, but I would do it all over again if I was given the choice", he said. "I was able to travel to many places and meet so many interesting people because of my job as an actor. I love the fact that I can try my hand at a number of different roles and challenges".

Jang is being touted as one of the newer Korean Wave stars following the huge success of the TV drama "You're Beautiful" in Japan and China, but he said his growing popularity does not interfere with his normal life at home.

"I freely walk around the streets and I go to university like a normal student", he said "If you stay at home all the time, how can you stay in touch with the world and gain the kind of experience you need in order to expand your horizons as an actor?"

"You need to be able to meet and communicate with people and observe how they interact, which can be invaluable to improving yourself as an actor. I think part of my job is to constantly study how people live", he added.

Showing his limitless ambition, he described his future goals as first conquering Asia and then becoming a global star.

"This is the way I approach things", he said. "If I were all talk and no action, I wouldn't be able to respect myself. So I set myself high goals and try my hardest to reinvent myself in that way. I never take anything for granted, whether it is my singing and recording or acting ability, because I want to be a household name in Asia and the rest of the world".

"Jang Keun-suk Defends Slavish Portrayal of Men in 'You Pet'"
by HanCinema is licensed under a Creative Commons Attribution-Share Alike 3.0 Unported License.
Based on a work from this source