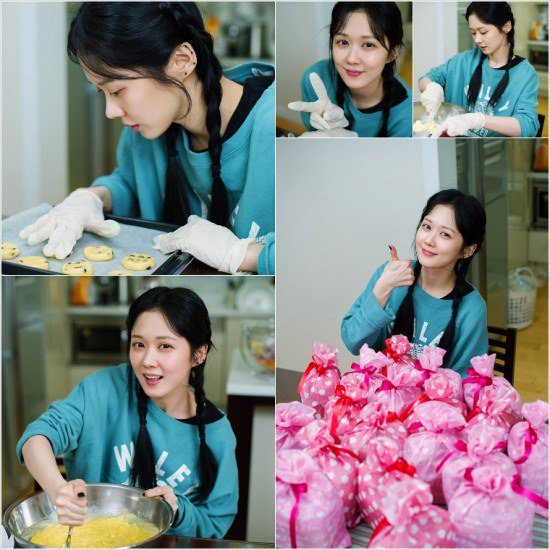 Actress Jang Nara showed her special appreciation to her fans.

On her official website, a 'live time comment' event was held on the 8th. Jang Nara commented on her fans' posts in live time in celebration of the New Year. This allowed for communication with her fans.

She then picked 20 fans and sent them presents of books, soap, hand cream, fruit tea and handmade cookies.

Pictures of Jang Nara hand-making the cookies were posted online. She smiled brightly as she beat the dough and even checked the shapes of the cookies before she put them in the oven to bake.

She also held up a 'V' to show that her cookie-making was successful and gave a big thumbs-up after wrapping them.

She made the cookies for her fans on the 21st. She spread out the ingredients on her kitchen counter and did her best to make the most delicious cookies for her fans. She started around 8PM at night and finished around midnight. She thought of her fans who would be happy to receive her presents and even wrote handwritten cards. She hand-wrapped every present.

The cookie-making was Jang Nara's idea. Initially, the event was to send out hand-picked books to the fans but Jang expressed that she would like to be more thoughtful and added more. The fans who received Jang Nara's special gift set posted evidence shots on the bulletin board.

Jang's management Nara Zzang.Com said, "We've always wondered how we could repay the support she's been getting. We think this opportunity got us closer to the fans and we plan on making this a habit".

Meanwhile, Jang Nara starred in the MBC drama "Fated to Love You" and "Mister Baek". She was awarded the 2014 MBC "Best Act", "Best Couple" and "Most Popular". She's going to take a break until she finds something suitable for this year.

"Jang Nara delivers self-made present to fans of 14 years"
by HanCinema is licensed under a Creative Commons Attribution-Share Alike 3.0 Unported License.
Based on a work from this source