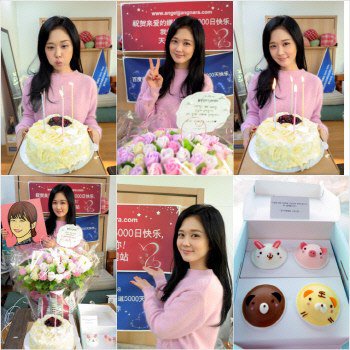 Actress Jang Nara celebrated the 5000th day of her debut. She took pictures proving the messages and presents she received from her fans.

While she was taking profile pictures in a studio, her fan club "Nara Sarang" sent her surprise messages and presents to congratulate her 5000th day since debut.

Apparently, Jang Nara was touched by the attention her fans gave her and her eyes became watery. She smiled brightly for the camera holding the presents she received.

Narazzang.Com her agency stated, "Thanks to the support of her domestic and foreign fans, Jang Nara is able to stand where she is today. Thank you, to all the fans who show your love and support for her".

"Jang Nara's 5000th day since her debut, present shower"
by HanCinema is licensed under a Creative Commons Attribution-Share Alike 3.0 Unported License.
Based on a work from this source