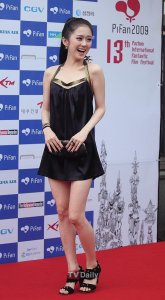 Jang Nara, the Korean wave (hallyu) singer and actress, lost nearly 7 kilograms to shoot for "Sky and Sea", which will be premiered in late October.

Joo Ho-sung, Jang's father and also an actor, said in a recent press interview that his daughter suffered from the drastic drop in weight (from 45 kg to 38 kg), which led to some health-related problems.

While in China, in particular, Jang was taken to a hospital after collapsing due to anemia at an airport.

Yet the 28-year-old reportedly wants to keep her current weight after being praised for looking prettier.

In the movie, the first for Jang since starring in "Oh! Happy Day" in 2003, she plays the role of an autistic child whose musician parents die in a traffic accident. Jang lost weight to fit the role of a pale and slender girl.

Jang started her career as a child actress, and is now highly active in China, having stints in singing and acting.

"Jang Nara Sheds 7 kg for Movie"
by HanCinema is licensed under a Creative Commons Attribution-Share Alike 3.0 Unported License.
Based on a work from this source