Jang Nara to be associate professor at university in Beijing 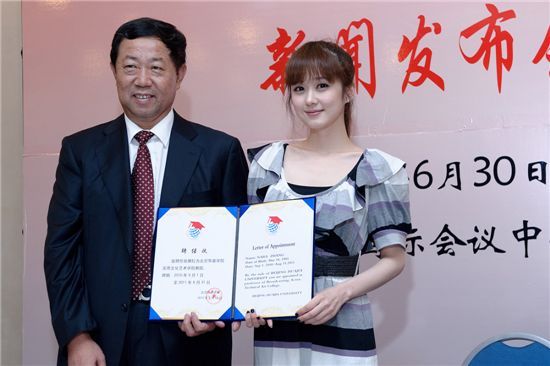 Hallyu star Jang Nara has been appointed an associate professor at a university in Beijing, according to her agency on Friday.

Her agency announced in a press release that Jang received a letter of appointment from the president of Beijing Huajia University at a press conference in front of 100 media reporters, held at the Beijing International Convention Center on June 30.

"Acting is a form of study which is aimed at developing one's attributes rather than teaching something. Each generation has different forms of expressions so wouldn't there be a need for young professors too?" Jang was quoted as saying at the event.

Jang made her debut in the entertainment industry as a singer, releasing her first album "The First Story" in 2001. The album spawned several hit songs including "Burying My Face In Tears" and "April Story", selling over 250,000 copies.

She then became a household name with the success of her second album "Sweet Dream" (2002) which sold over 400,000 copies.

Jang also made an impressive crossover into acting, starring in several hit dramas and films including the popular sitcom "Non Stop 2" (MBC, 2001) and "The Successful Story Of A Bright Girl" (SBS, 2002).

She will be filming a Chinese drama about medicine and the follow-up to "My Bratty Princess" in the fall.