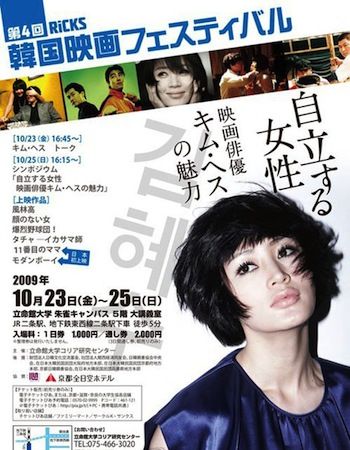 The Korea Research Center of Ritsumeikan Asia Pacific University of Japan will hold the 4th Korean Film Festival on October 23-25. This year, the festival is dedicated to Korean actress Kim Hye-soo, who is considered a symbol of independent women.

The festival is aimed at shedding light on Korean cinematography, history and culture through movies that star a certain actor or actress. Launched in 2006, the festival has so far screened movies starring Moon So-ri, Choi Min-sik and Ahn Swong-gi.

This year, six films starring Kim Hye-soo will be screened. They are "Kick the Moon", "YMCA Baseball Team", "Faceless Beauty", "A Good Day to Have an Affair", "Tazza: The High Rollers" and "Modern Boy". The festival will also feature a symposium of Korean and Japanese film experts.

Kim Hye-soo will meet with the audience to talk about her life and acting career.

An official from the festival's organizing committee said that Korean movies were not only high-quality entertainment content but that they also fully represented changes in Korean society. He also added that movies starring Kim Hye-soo would hopefully help Japanese viewers better understand Korean films.