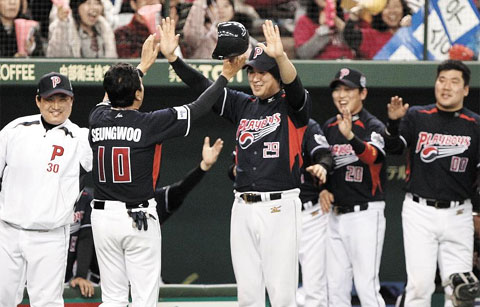 Playboys captain Kim Seung-woo celebrates with his teammates after making a run during a friendly match against a team of retired Japanese professional baseball players on Sunday. /Courtesy of Sports Nippon

A crowd of over 21,000 people turned out at the Tokyo Dome on Sunday to watch a friendly baseball match between some of Japan's top retired players and an amateur team of Korean actors called the Playboys.

Fans braved cold weather and paid as much as 12,000 yen apiece to see the game and most of all the Playboys, whose star-studded roster included actors Hwang Jung-min, Kim Seung-woo, Ji Jin-hee, Lee Jong-hyuk, and Gong Hyung-jin.

Jang Dong-gun and Hyun Bin, who are also members of the Playboys, could not make the game due to their busy shooting schedules.

The ceremonial first pitch was thrown by Korean Japanese Jang Hun (Isao Harimoto in Japan), a legendary figure in Japanese baseball history who holds the record for the most hits in the professional league (3,085).

The retired Japanese players won the game, 12-6. The MVP title of the day was shared between Kim Seung-woo, designated hitter for the Playboys who knocked two hits in two at-bats, and 40-year-old Ken Suzuki of Japan who recorded two hits and two runs in three at-bats.

Korean slugger Lee Seung-yeop of the Orix Buffaloes, who was invited as a guest, watched the game from the dugout. "I can't wait to play with Park Chan-ho who is now my teammate", he said. "I think we can make a big contribution to the team".

Regarding the competition with teammate Takahiro Okada for the cleanup spot on the Buffaloes' batting lineup, Lee said, "I don't care about it. I haven't been able to play for the last three years. I just hope to play every game in the coming season".

In addition to Lee and Park, two other Korean players will be playing in Japan's professional league next season: Kim Tae-kyun of Chiba Lotte in the Pacific League, and Lim Chang-yong of the Yakult Swallows in the Central League. 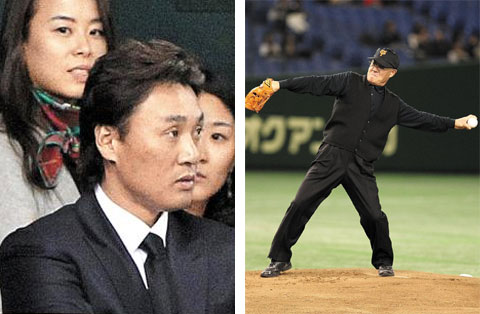 Left: Lee Seung-yeop of the Orix Buffaloes watches the game from the dugout; Right: Jang Hun throws the first pitch of the game. /Courtesy of Sports Nippon

"Japanese Fans Flock to See Korean Celebrities Play Baseball"
by HanCinema is licensed under a Creative Commons Attribution-Share Alike 3.0 Unported License.
Based on a work from this source