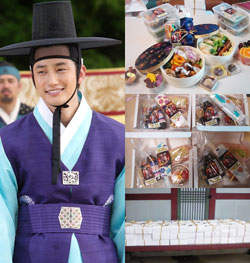 Japanese fans of Park Si-hoo showed their die-hard devotion to the actor by delivering special packed lunches known as "bentos" in Japanese to him and around 100 crew members of the KBS2 TV drama "The Princess' Man" on Tuesday.

The fans came to Korea specifically to give this surprise gift to the star and crew while they were shooting in Mungyeong, North Gyeongsang Province. The bentos, which contained snacks, dessert and food to keep the production team energized, were wrapped in a sticker cheering the crew on.

"We can see how Park's popularity is soaring by the day", said one of the crew members. "Thanks to the delicious food prepared by Park's fans, actors and staff who were exhausted could continue filming with renewed energy".

"The Princess' Man" has yielded the highest domestic viewer ratings among TV series aired on Wednesdays and Thursdays. It airs at 9:55 p.m. twice a week.