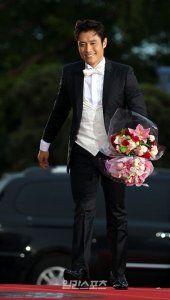 Journalists from some 30 Japanese media outlets will cover the filming of actor Lee Byung-hun's upcoming movie.

A person from the movie's production company KM Culture said that some three dozen Japanese media outlets have already expressed their desire to cover the filming on August 28 in South Jeolla Province. Another official said the number of Japanese journalists will amount to 60-70, on par with the number of Korean journalists expected to visit the filming site that day.

The reason so many Japanese media outlets are eager to cover Lee's acting despite the somewhat inconvenient location is the actor's popularity in Japan. Media outlets that will be unable to dispatch their reporters to the scene will visit the filming site later.

The new movie is a story about the past and present of a man cherishing the memories of his first love. Lee plays the movie's main character, Yoon Seok-young, and acts opposite actress Soo Ae, who plays Seok-young's first love, Jung-in.

The Japanese movie distributor SPO bought the movie for four million dollars even before its filming began. In the past, SPO had imported a host of South Korean movies, including "Almost Love", "My Tutor Friend" and "Fighter in the Wind", among others.

About 70 percent of Lee's upcoming movie has been filmed so far. The movie will open in the second half of this year.