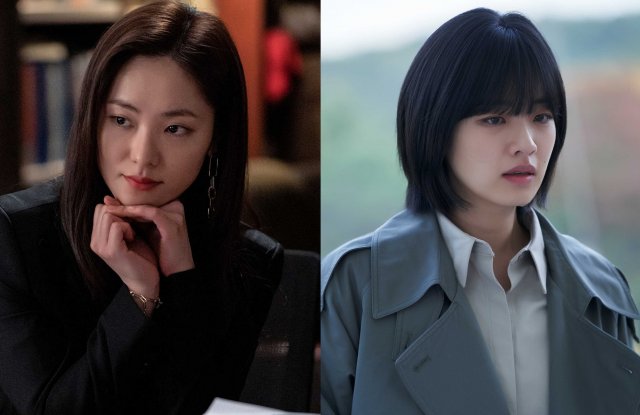 Actresses Jeon Yeo-bin and Lee Joo-young are blowing fresh air into the small screens. The two succeeded in catching the viewers' attention by playing the heroine of tvN's "Vincenzo" and OCN's "Times" which first aired side by side on the 20th. The two people, who have mainly been working in movies, have met as partners of Song Joong-ki and Lee Seo-jin, respectively, showing their strong presence.

Jeon Yeo-bin won the game with comicality in "Vincenzo". She plays the role of a lawyer who is so freaky and will do anything to win a case. She delivered laughing factors with her bluffing and condescending way of speaking and complacency. While being threatened by gangsters, she grabbbed them by the collar, saying, "If you touch me one more time, I will make you pay". Some point out that it is 'too exaggerated', but there are a series of responses that they have built a unique personality that does not fall behind Korean Hallyu star Song Joong-ki.

The dark character from "After My Death", which won 11 rookie awards, including the Busan International Film Festival, was nowhere to be seen. As much as the obvious change, "Vincenzo" is a 'challenge itself'. Song Joong-ki expressed his affection for his co-star, saying, "As I did, viewers will also feel that she is a great actor".

Lee Joo-young's transformation is also eye-catching. Instead of the neutral charm shown in JTBC's "Itaewon Class" and the movie "Baseball Girl" last year, she shows off her straight face as a reporter for a broadcasting company. She accidentally connects to the phone with Lee Seo-jin who is a newspaper reporter from 5 years ago and struggles to prevent the death of her father and president, Kim Young-chul.

On the screen, she made her main debut in the 2019 film "Maggie" but this is her first drama. She challenges new genres that mix the characteristics of political dramas with time shifts. It's a strange environment, but she succeeded in winning favorable reviews for leading the story stably.

"Jeon Yeo-bin and Lee Joo-young, New Faces of the Drama World"
by HanCinema is licensed under a Creative Commons Attribution-Share Alike 3.0 Unported License.
Based on a work from this source