Jeong hits the stage with 'Hairspray' 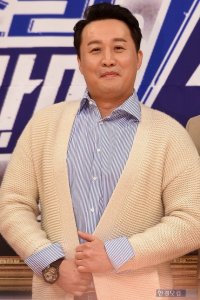 Jeong Jun-ha, a well-known comedian and TV celebrity, has dreamed about performing on the musical stage for a long time. Although the 34-year-old comedian has been a noticeable success on TV, a career as a theater actor seems to be the ultimate goal in his life as an entertainer.

"I have long been dreaming about becoming a musical actor. (Doing musicals) is not for money or to show off your popularity. But I know what it feels like sharing the moment with the audience in a small theater where actors and viewers truly become one", said Jeong in an interview with The Korea Herald.

"This makes me so happy".

Jeong has been one of busiest TV entertainers this year, thanks not only to his fat -- he loves food as much as he loves his chubby body -- but also his man-next-door character. His character -- a big but timid guy on primetime TV shows and in some comedy movies -- has made many people laugh. His photo with Paris Hilton gained him notoriety in the United States when it appeared on the homepage of the online edition of "People" magazine.

Now Jeong is perhaps at the crest of his life, extending his talent to the musical stage, with the Korean rendition of the Broadway hit "Hairspray". He takes the role of Edna Turnblad, a plus-sized introverted mother -- not father -- in the musical.

In the original Broadway version Edna was played by Harvey Fierstein, a gravelly-voiced actor who won a Tony Award for the Best Performance for the lead role. Hollywood star John Travolta follows in Fierstein's footsteps in the film adaptation of the musical scheduled to be released in Korea early next month.

The Broadway musical, which was adapted from John Waters' 1988 comedy film of the same title, won eight Tony Awards out of 13 nominations and has played on Broadway over 2,000 times.

Jeong's Edna is, of course, totally different from the characters played by the two big American stars.

Although his singing and dancing talent is not so brilliant compared to other musical actors, at least he has created his own Edna which is funny enough to entertain the audience.

He was the actor who received the most attention from the Korean audience, rather than the lead Tracy played by Bang Jin-ui or the handsome Link played by Kim Ho-young.

"Edna is an insecure introverted mother who shut herself in the laundry most of her life", said Jeong.

"Although it was hard for a male actor to play I accepted the offer. I wanted to be someone who can hold out hope for those who hate to be outside because they are fat and ugly. I wanted to show that they can also be lovable, like the character I play in the musical".

Asked whether he cares about being fat, he said, "I don't think I am a fat guy. Even though I have been taking many roles -- mostly fat, incompetent, heavy eaters -- I guess being a fat guy has given me a lot of opportunities.

"As long as people love me as I am presented on TV, in movies or even in musicals, I am quite satisfied. You know, being fat can also be attractive", said Jeong with a big smile.

"Jeong hits the stage with 'Hairspray'"
by HanCinema is licensed under a Creative Commons Attribution-Share Alike 3.0 Unported License.
Based on a work from this source