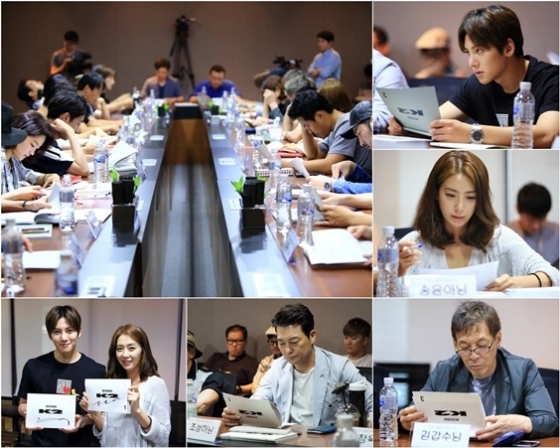 Bodyguard action drama, "The K2" tells the story about a bodyguard and a former mercenary, Kim Je-ha (Ji Chagn-wook), Choi Yoo-jin (Song Yoon-ah), wife of a presidential candidate, who hired him as her bodyguard, and Ko Ahn-na (Yoona), who lives away from the reality world.

Director Kwak said, "My heart is pounding to face the beginning of the production. I'm excited with what our actors will deliver".

Ji Chang-wook said during the following interview, "I've decided to choose "The K2" because the character, Kim Je-ja is so cool and love the screenplay" and "Action drama is a difficult genre but I'm attracted to it repeatedly. The drama begins with an intense action acting scene, which I believe will impress our drama fans".

Yoona joined later after the main script reading to have her own script reading session with the production team. Yoona said, "I'm excited because with this new role, I'll be able to show my other sides that I haven't had a chance to show so far". She asked drama fans for much support.

"The K2" premieres on September 23rd.

"Ji Chang-wook and Song Yoon-ah at 'The K2' script reading"
by HanCinema is licensed under a Creative Commons Attribution-Share Alike 3.0 Unported License.
Based on a work from this source