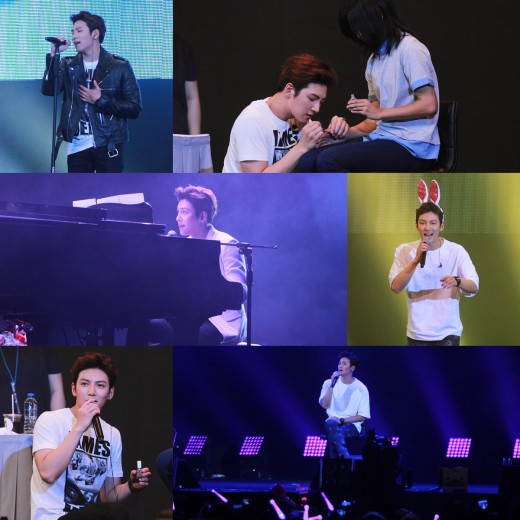 Ji Chang-wook owned the feverish crowd on the venue during his Hong Kong fan meeting, 'THIS IS JCW' on June 20th as he presented the incredible love and the super class service for his fans.

He has been ever enthusiastic with the fan meeting from the planning stage of the event. He went on the stage without an interpreter and proved he still could communicate with his fans well as he wanted a direct communication with his fans. His considerate thoughts touched his fans' heart.

Ji Chang-wook enjoyed playing games with his fans and gave nail art set as a gift. He also painted nails for one of his fans. He thenreenacted the Snow Flower Kiss scene from "Healer" with one of his fans on the venue. This will be an unforgettable memory for many of the fans, who were at the venue.

His charismatic performance and sincere and cheerful talk continued on the stage. He also sang the original sound track, 'I'll keep you safe" from "Healer". After finishing the song, he apologized, "It was not as great as the time when I practiced. I'm sorry". His cute apology made the audience feverish instantly.

The flamboyant stage and the unique performances matched the quality of a concert. It proved Ji Chang-wook's efforts to show the love towards his fans.

Although the fan meeting was right after his tight schedule from UK to Hong Kong via Shanghai, Ji Chang-wook looked absolutely excited.

After the fan meeting, his fans started spreading their experiences through online as well as offline. Also the local media covered his news on their front pages, proving his elevated stance as a hallyu star.

Ji Chang-wook is currently accommodating busy domestic and international schedules while he is reviewing scripts to select his next project.