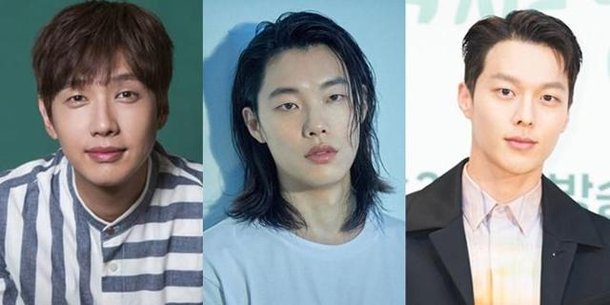 The craze for younger guys, is blowing again; from rising stars to the younger guy. Actors who will captivate their fans meet with older actresses and herald chemistry. As romance genres have been on the decline recently, broadcasters are hoping that the younger male craze will lead to a pleasant warm breeze.

First of all, Ji Hyun-woo overcomes the 33-year-old age gap and performs a strong melodramatic performance. The movie "Everglow" which will be released on the 30th, is about the special love between Jin-ok (Go Doo-shim), a Jeju diver, and producer Kyeong-hoon (Ji Hyun-woo), who films a documentary starring her. Attention was drawn to the return of Ji Hyun-woo, who was described as a national junior in the drama "Old Miss Diary - Drama". In the film, Ji Hyun-woo overcame the age gap with Go Doo-shim and expressed deep emotional performance, which received critical acclaim. It is rumored that Ji Hyun-woo created a masculine image considering weight loss in order to revive the image of a younger man.

JTBC's new drama "Lost" which will air in the second half of the year, tells the story of ordinary people who have been walking to the light as best as they can, suddenly realizing that they have been nothing. The story of Bu-jeong (Jeon Do-yeon), a woman who loses her way without being anything, Kang-jae (Ryu Jun-yeol), a man at the end of his youth who is afraid of being nothing, and the heartbreaking healing and empathy of the two men and women in front of intense darkness are densely depicted. Jeon Do-yeon and Ryu Jun-yeol portray melodrama with sincere acting.

SBS' new drama "Now, We Are Breaking Up" which will be broadcast at the same time, also features romance between two people with an age gap. A full-fledged romance genre has been heralded in that it is writer Je In's latest and participated by Kang Eun-kyeong, the creator of "Misty" and "The World of the Married". In particular, Jang Ki-yong and Song Hye-kyo's acting as lovers is the main focus. Jang Ki-yong is expected to show his unique chemistry with Song Hye-kyo by choosing "Now, We Are Breaking Up" as his last work before joining the military.

Lim Soo-jung and Lee Do-hyun are considering appearing in tvN's new drama "Melancholia". "Melancholia" is a work of confusion that occurs at a prestigious private high school due to the 'sexual' scandal involving teachers and students. Earlier, it was reported that Lim Soo-jung was discussing her appearance as Ji Yoon-soo, a math teacher, raising expectations. As a result, drama fans are curious about what chemistry the two would show as teacher and student.

Recently, romance genres have lost its effect. Recent dramas that focus on love between men and women, such as "Doom at Your Service" and "My Roommate Is a Gumiho" have been evaluated as unsuccessful. "Nevertheless" which depicts Song Kang and Han So-hee's dangerous love, is still struggling in the 2% range. Unlike "Crash Landing on You" and "It's Okay to Not Be Okay", the genre has been sluggish because their narrative is no longer new to viewers.

At this point, the age gap romance once again heralds a romantic frenzy, carrying the glory of the past. As the trend of the times changes, active female characters are receiving great support. In addition, the female-centered narrative in the work determines the popularity. In line with this, Jeon Do-yeon, Song Hye-kyo, and Lim Soo-jung lead the younger men to make a series of appearances.

It remains to be seen whether their meeting will bring new fun to viewers who are tired of boring romance.