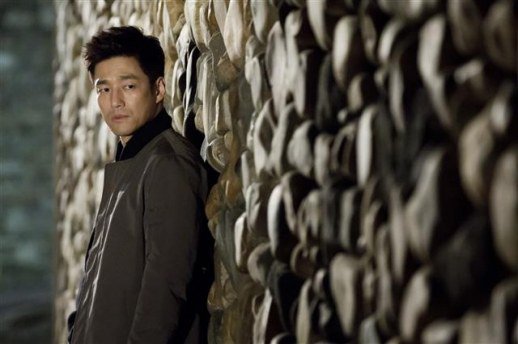 There are several women who say they feel vulnerable by this man's eyes every weekend. It's not a Hallyu star or an idol, but actor Ji Jin-hee who is in his 40s. He stars in the SBS weekend drama "I Have A Lover" as Choi Jin-eon. We met with him recently and asked if he felt how popular he was, he laughed and said, "I hear there are many people who download our drama in high quality".

At first, he earned the nickname, 'the affair man' because of his character who abandons his wife Do Hae-kang (Kim Hyun-joo) for a younger Kang Seol-ri (Park Han-byul). Viewers were boiling with anger when he asked his father to 'get rid of' Hae-kang from his sight. However, watching ex-wife live the life of her twin sister Dok-go Yong-gi without knowing it, caused him to feel bad for her and the way he looks at her is what stole the hearts of many. Many wives claim they want to fall back in love with their husbands.

"This drama is about loving one woman in the end. I love Hae-kang, Baek Seok (Lee Kyu-han) loves Dok-go Yong-gi and Sully loves me. Here, the word 'lover' means the person I love. Jin-eon didn't like the way the innocent Hae-kang he first fell in love with, turn into a devil. His emotions started from guilt.

Of course, Ji Jin-hee couldn't understand Jin-eon who fell in love with the ex-wife who induced divorce. "I was hit in the back of the head twice by my wife while watching TV. First was when I kissed Sully and the second time was when I kissed Hae-Kangin the preview. I couldn't understand him at first, but Kim Hyun-joo said the writer wasn't one to 'simply' write a story".

He shares an earphone with Hae-kang listening to music sitting on a wall or asks her out to lunch. Getting into the emotion was easy for Jin-hee as Hyeon-joo was listening to a sad song on her earphones.

This isn't the first time he's played the 'affair man'. He had a similar role in the SBS drama "Kind Words". Ji Jin-hee said, "Anyone can be lonely and not everyone knows me but melodramas come from understanding that loneliness".

Unlike his reserved looking image, Ji Jin-hee is gifted with words. He has clear views and he refused all promotional offers after "Dae Jang Geum" and that is because he didn't think his talent was worth the popularity. "I do regret it sometimes, but I didn't want to take the easy way".

He's always back with a new character. In the movie "Sorry, I Love You, Thank You" which is coming out on the 29th, he plays a detective who takes care of the daughter of the killer who killed his daughter. "I felt emotions I never felt before and I realized it was innocence. I had only been thinking with my head and I never saw things purely. I felt that I had improved in acting".

He dresses young too. He claims that he works out until the point of passing out.

"I want to try a melodrama that's light and romantic. It's only natural that I get older so I have to make an effort. Being an actor is a job which develops with more experience and thought".

"Ji Jin-hee's secret to acting? Understanding loneliness "
by HanCinema is licensed under a Creative Commons Attribution-Share Alike 3.0 Unported License.
Based on a work from this source