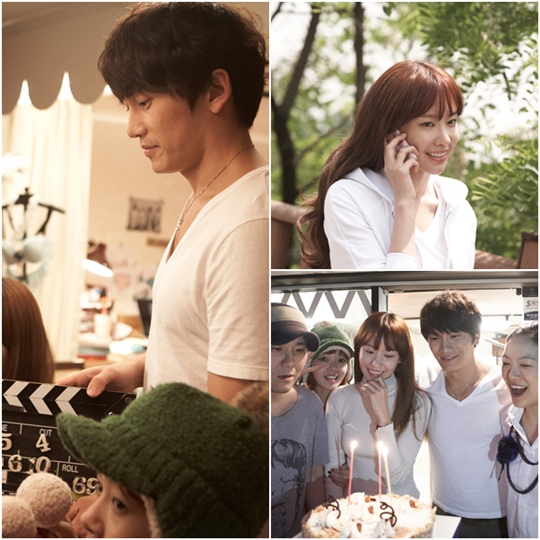 "Whatcha Wearin'?" has been as issue for its shocking subject and the return of Ji Sung and Kim Ah-joong.

The final scene was taken on the 11th in Seoul in which Yoon-jeong (Kim Ah-joong) sings on the phone with a radio program. The shoot started in the evening until the next morning and Ji Sung visited the site to share the last moment.

Acting as a supporter, Ji Sung slated the cut and couldn't help but feel disappointed at the finishing of the movie shoot.

Later, Ji Sung said, "I worked hard like a rookie on this one. I am anxious because I think it will turn out good". Kim Ah-joong said, "I am grateful to those who put in hard work in this movie. I hope it turns out to be a good movie".

Meanwhile, "Whatcha Wearin'?" is an adult rated romance comedy about a man who can't forget his ex-girlfriend and a woman who wants to get married, getting involved with each other in the wrong ways with a phone call. To be released this winter.

"Ji Sung and Kim Ah-joong in "Whatcha Wearin'?""
by HanCinema is licensed under a Creative Commons Attribution-Share Alike 3.0 Unported License.
Based on a work from this source