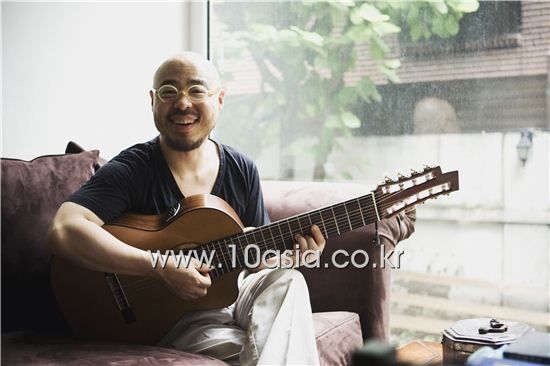 There is film music that lasts in one's memories for as long as or longer than the movie itself. Most such music are regarded masterpieces and in that sense, the film music that guitarist Lee Byeong-woo has made are worthy of joining the ranks of masterpieces. But his music will arouse one's memory of a scene from a movie rather than let it become forgotten.

By "making music as someone always siding with the main character" with the hope that "people will regard movies warmly", Yoo-rim's (played by Park Hae-il) shameless love in "Rules of Love" is depicted as being cute and young while the clowns in "The King and the Clown" are portrayed in an even more sad and sympathetic light. That is why for Lee's work, music and film are one. Just like the scenes that emerged in the interviewer's mind as he played the melody to the soundtrack from "Rules of Love" on his guitar.

What memorable moments will he bring back through his film music performance on "Breeze Night" on August 16?

"[JIMFF] Lee Byeong-woo says "always on main character's side""
by HanCinema is licensed under a Creative Commons Attribution-Share Alike 3.0 Unported License.
Based on a work from this source