Jin Goo, "Doing something inhumane like a human is expressing the character" 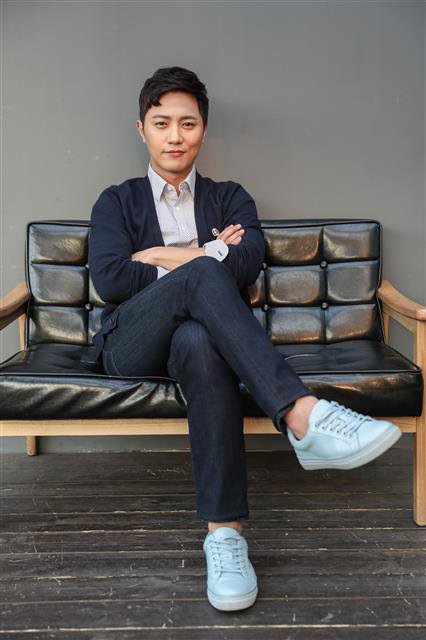 "It would be a lie if I said I didn't want to become the top actor. I just don't have 100% confidence yet. I hope in the next 3~4 years, I'll be an actor who makes the movie tickets worth it. I also want to be in the poster by myself too".

Actor Jin Goo is coming back with the criminal movie "One Line". It's been two years since "Northern Limit Line". Before this, he'd been in the successful drama "Descendants of the Sun" and also in an unsuccessful drama called "Night Light". "One Line" is based in the middle of the 1990s and he plays a veteran loan fraud named Jang. He discovers a college student named Min-jae (Im Si-wan) who has a knack for deceiving people and brings him up as the next him. He lives by a principle that he doesn't fool people with low credit rating.

"When I first met director Yang Kyeong-mo-I, I felt that he knew me better than I did. I felt I could bring out more than I think if I worked with him. This is the third time I chose something in the light of the maker. I did what he said and spoke and behaved like Jang and I think bringing out the inhumane in a humane way turned out well".

Jin Goo has usually been in heavy movies and characters but recently he's been working on brighter ones. "One Line" is comedy but he claims it's too much for him. "I think I don't feel confident about comedies because I failed badly with the comedy I debuted with. I can humor someone in everyday life, but I don't feel comfortable acting out someone else's story".

With Im Si-wan, he claims they have similar hobbies in collecting figures, comic books, watching animations and blockbuster movies. "He reminds me of me when I was young. He recklessly analyzes the script and puts himself hard at work. In the long term, enjoying to do that is for the best".

- Start from the lowest stair and enjoy the scenery

This is a piece of advice he experienced himself. "During my first early 2 years I was anxious and went through about 70~80 auditions. I didn't pass any of them. I had almost given up when I landed myself a role in "A Dirty Carnival". I always got scolded if I spent overnight thinking about my character. I learned that not thinking about anything was for the best. That was the last time I was scolded by the director. I started to let things go since "Mother - 2009". I put my trust in the director and my grades have been improving".

It's been 15 years since he debuted with the drama "All In" as a child. He played lead roles and supporting roles and he's used to standing next to the main character than in the middle. However, he's in no haste. "I am sure I'm in a higher position than I was when I was younger. I don't think I'm enjoying it 100% but I know I am at a higher point than I was when I was a rookie. I started from the lowest stair and came up to here. I plan on enjoying more scenery in the future".

"Jin Goo, "Doing something inhumane like a human is expressing the character""
by HanCinema is licensed under a Creative Commons Attribution-Share Alike 3.0 Unported License.
Based on a work from this source