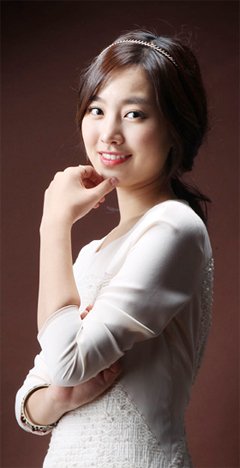 It's been only two years since she started acting, but 19-year-old actress Jin Se-yeon has been a favorite choice for leading roles in three TV dramas so far this year. "I think I still have a lot of growing up to do, but I've had to play mature characters who must endure many trials and tribulations, including extreme solitude", Jin said while laughing.

She was spotted by a talent agent back in 2007 when she was just a middle school senior and trained for about two months to perform as part of an all-girl dance group. She began appearing on TV commercials the following year, which is when she met her present manager.

Jin made her TV drama debut in 2010 playing a supporting role in "It's Okay, Daddy's Girl". She's since moved on to starring roles in the TV dramas "My Daughter, Flower", "Bridal Mask" and "Five Fingers". Jin is being touted as one of the main rising stars of 2012.

"I think I took just two days off this year", she said. "I think I caught the attention of directors who were looking for a fresh face, because I was a relatively unknown actress at that time".

However, the fact that she has been cast in similar roles has led to suspicions about her acting ability, and spawned rumors that a powerful figure was ensuring she got the best roles, or that her own father is perhaps some influential business tycoon.

"I probably would have had the same suspicions if I was a viewer", Jin said. "I wanted to change my hairstyle, dye it or do something to get a different look, but I really had no time due to back-to-back filming schedules. It's too bad that I often didn't even have enough time to prepare extensively for the roles I took".

Jin, who is a freshman majoring in performing arts at Chungang University, said she has yet to date, and that her first kiss took place in front of the cameras. "I think I'll be able to be more expressive on film if I fall in love in real life and experience more things", she said. She added that she hopes to play a variety of roles in the future.

"Jin Se-yeon on Becoming Famous Overnight"
by HanCinema is licensed under a Creative Commons Attribution-Share Alike 3.0 Unported License.
Based on a work from this source