Jin Young and Jinyoung Are the Hot Idol-Actors 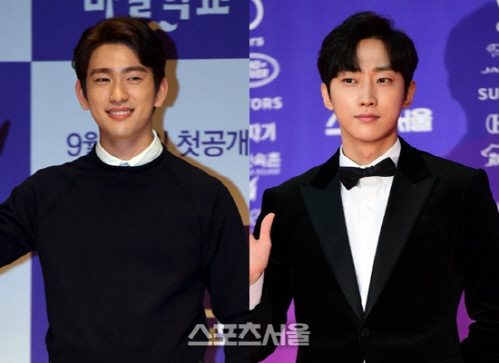 Who's next to follow in line of Park Hyung-sik, Im Si-wan and Do Kyung-soo?

The two Jinyoung's are drawing attention to themselves. B1A4's Jin Young ("The Dude in Me", "Moonlight Drawn by Clouds") and GOT7's Jinyoung ("He Is Psychometric", "Magic School") are the hottest rookies on the drama scene right now.

Jinyoung and Jin Young have been on the doorsteps of acting even before or right after their debuts. Jinyoung, also known as, Park Jin-young, is currently starring in the tvN drama "He Is Psychometric" as the lead actor, debuted with the 2012 KBS drama "Dream High" first. He then continued to appear in "When A Man's in Love", "My Love Eun-dong", "Magic School" and more. He made a reputation for himself when he appeared as a young Lee Min-ho in the SBS drama "The Legend of the Blue Sea" and stood out in the film "A Stray Goat" in a role that delivered all emotions without saying any lines.

He's currently in the role of a wannabe policeman who has the powers of psychometrics but doesn't know how to use it well. The drama isn't doing so well viewing rate-wise but Jinyoung finally plays a main adult role.

B1A4's Jin Young, Jung Jin-young, started off as a singer, but completely flipped his career and decided to be an actor. He was also a music producer so this change in paths was unexpected. Jin Young has been acting since 2013 in dramas "She Is Wow", "Sing Again, Hera Gu", "Warm and Cozy", and film "Miss Granny". His life met its turning point with this role in the KBS 2TV drama "Moonlight Drawn by Clouds". Jin Young's character of Kim Yoon-sung caused a syndrome.

He was in "Drama Special - If We Are Seasons", starred in the film "The Dude in Me" and is coming out with the Netflix drama "My First First Love". "The Dude in Me" is the first movie this year to reach breaking point and has made a profit of over 5 billion won. Jung Jin-young's performance is now not restrained to just dramas but movies as well.

The two Jinyoungs are consistent. They didn't end up being the lead actor overnight. They started off with short roles and cameos for the last 6~7 years. They used their own names instead of a nickname and their acting was so good it only became known later that they were idol singers in the beginning.

A source says, "The two actors are becoming solid actors. They are getting better. They are enough to say that they can be called actors and not idols. They also remain modest".

"Jin Young and Jinyoung Are the Hot Idol-Actors"
by HanCinema is licensed under a Creative Commons Attribution-Share Alike 3.0 Unported License.
Based on a work from this source