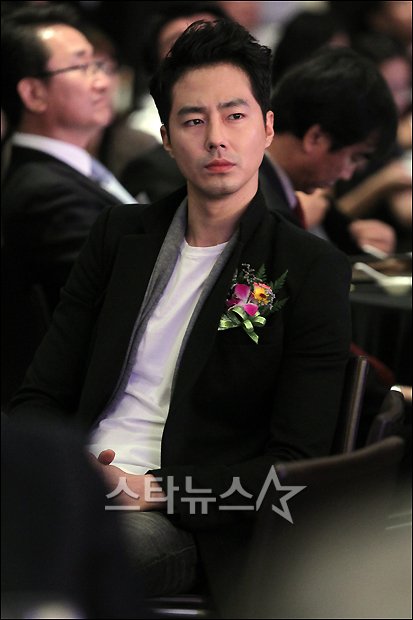 Actor Jo In-sung attended the "KAA Awards" in Seoul on the 20th of October. He was awarded the "Good Model" award chosen by the advertisers.

Actor Jo In-sung who was discharged from the army in May still hasn't been able to start his return flick. This is because of the "Kwon Bob" dilemma.

Jo In-sung decided on "Kwon Bob" directed by Bae Jong from "Welcome to Dongmakgol" as his next piece of work. This movie is about a man named Kwon Bob from the near future full of male union who falls in love with a woman who hides her identity and fights for her village. It is a 18 billion won blockbuster.

Invested and distributed by CJ E & M, it was supposed to start rolling at the end of September. However, after CJ E & M failed to promote "Sector 7" and "Quick", there have been different views about "Kwon Bob" and went into reexamination, therefore delaying it from shooting.

"Kwon Bob" is still negotiating with CJ E & M but it isn't being concluded easily.

As he isn't starting on anything anytime soon, there have been busy movements by people from the movie and TV drama industry to cast him in something else. "The King 2 Hearts" is directed Lee Jae-gyoo from "Beethoven Virus". Under the idea that Korea was ruled by a king, the king's brother the prince is ordered to marry a former North Korean Special Forces agent. Won Bin, Lee Byung-hun and other top stars are likely candidates.

"The King 2 Hearts" is moving with the plan to suit Jo In-sung up with an actress he has worked with before. However, because of "Kwon Bob", he hasn't given them a straight answer yet and they are anxious.

Even loyalty is moving in the movie industry. Director 'A' who created a thriller recently was to create an SF film but as he is changing directions and going after Jo In-sung. Other movie makers are also slowly approaching him.

It is Jo In-sung's official statement that he is waiting for the production of "Kwon Bob". His management revealed, "We are waiting for "Kwon Bob" to start off well". However, they aren't just refusing other offers but still going to meetings to hear them out. This is unlike the first time he was out of the army when everything was refused. He can't wait forever for "Kwon Bob".

Would "Kwon Bob" be approved and start shooting soon? Will Jo In-sung start on something else? These are something to standby and watch for. Jo In-sung is being loyal but what the distributors will think, should be decided soon.

"Jo In-sung "Kwon Bob" dilemma... Lee Jae-gyoo's "The King 2 Hearts" anxious"
by HanCinema is licensed under a Creative Commons Attribution-Share Alike 3.0 Unported License.
Based on a work from this source