Jo In-sung, So Ji-sub and Lee Min-ho at the awards 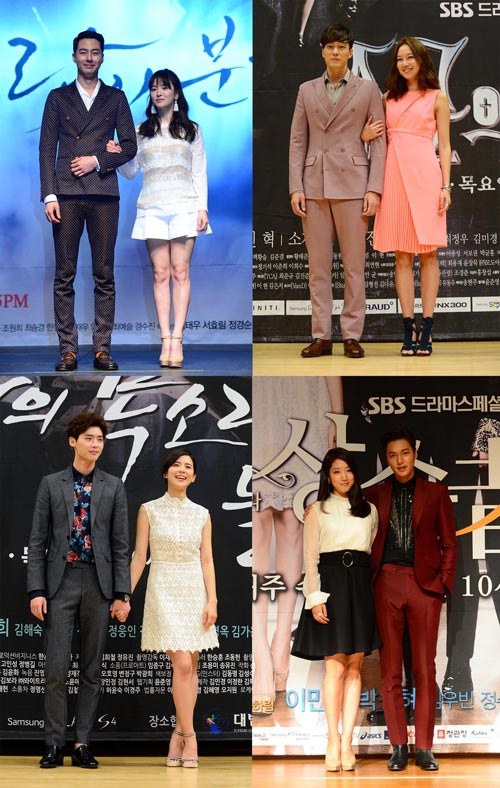 The heat's on the 2013 SBS Awards. The line-up for this year's dramas were pretty fancy.

The SBS Awards will take place on the 31st under the lead of Lee Bo-young and Kim Woo-bin.

Top stars were seen on SBS this year and the dramas were also a big hit. Jo In-sung and Song Hye-kyo's "That Winter, the Wind Blows", Lee Bo-young and Lee Jong-suk's "I Hear Your Voice", So Ji-sub and Gong Hyo-jin's "Master's Sun" and Lee Min-ho, Park Shin-hye and Kim Woo-bin's "The Heirs" are the ones that highlighted this year's drama industry. Jun Ji-hyun and Kim Soo-hyun's "My Love from the Star" is currently airing now.

The appearance of the stars from those dramas; So Ji-sub, Jo In-sung, Lee Jong-suk, Gong Hyo-jin, Lee Min-ho and Park Shin-hye incuding Lee Bo-young and Kim Woo-bin who are already appearing at the event will be a great deal to see.

They are also candidates for online votes such as "The Most Popular Star By Viewers" and "The Best Couple". Curiosity builds as no one knows who is going to win the awards.

Ahn Cheol-ho, producer of the SBS Awards, said, "It is true the Wednesday and Thursday dramas are hotter in response at the moment. I thank everyone who's shown love and support throughout the year.

Meanwhile, the SBS Awards will be broadcasted live not only on SBS TV but on SBSNOW the official Youtube site, the official Twitter @SBSNOW, the homepage and mobile web POOQ.

"Jo In-sung, So Ji-sub and Lee Min-ho at the awards"
by HanCinema is licensed under a Creative Commons Attribution-Share Alike 3.0 Unported License.
Based on a work from this source